Upon reviewing the limited press releases and considering the “major new initiative that will specifically address the dearth of African-American executives,” we feel compelled to share initial thoughts.

First, we believe any effort to improve the advertising industry’s lousy record on diversity is a sign of progress. Additionally, Howard University and the John H. Johnson School of Communications are respected enterprises with extraordinary people, outstanding resources and noble intentions. But the scenario thus far sparks a lot of questions and criticism.

Based on the PR, it almost looks like Howard University conceived and sold the concept. On the one hand, our industry always boasts that we only want the best ideas, and we don’t care who comes up with them. Yet there’s a disturbing pattern with diversity-related “solutions” on Madison Avenue and beyond. Specifically, outsiders—from Sanford Moore to Jesse Jackson to New York City’s Commission on Human Rights—tend to orchestrate and execute the mini-revolutions. Ms. Hill, why isn’t anyone directly tied to the 4As ever proactively and officially leading the charge?

Insider groups haven’t fared much better, probably because these collectives are often comprised of appointed minorities. While they have the requisite industry smarts, they’re missing the coercive muscle. Hey, if minorities could make it happen, wouldn’t they have fixed everything countless decades ago?

In the past, the 4As and AAF awarded fancy titles to minority representatives who rarely elevated above lame duck/puppet status. It’s possible, Ms. Hill, that you’ve contemplated this route. Oh, it would be extremely easy to crown Heide Gardner or Tiffany R. Warren as the 4As Celestial Goddess of Divine Diversity and insist they do the heavy lifting. Been there, done that.

There are grass-roots projects making inroads too. But they’re typically small, localized endeavors run by minorities.

So what’s our point? Minorities have consistently played big roles in the movement. And they will be integral partners in the global attempt to reach the Promised Land.

To realize the dream, however, we’ll need to integrate the front line offensive with honchos from the ruling majority—i.e., White folks. That means you, Ms. Hill. We can’t permit Whites to hide under their desks and grumble the dilemma is the sole property of colored people.

Bear with us for a minute as we wind toward the heart of our recommendation. As blog visitors know, MultiCultClassics routinely posts diversity recruitment ads from various corporations. About 99.99 percent of these messages are clichéd, contrived crap. But we recently discovered a semi-fresh example. Here it is (click on the image to enlarge): 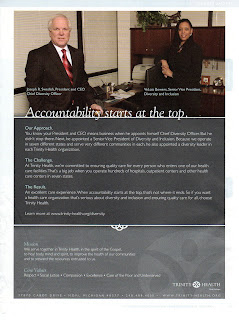 In this company, the President and CEO elected himself Chief Diversity Officer. As you can see, Ms. Hill, he’s a White guy. Now, we can’t verify if it’s just a patronizing smokescreen. Who cares? It’s damned gutsy. And the headline nails the notion: Accountability starts at the top.

Take our simple advice: Seize the position of 4As Chief Diversity Officer. Resist the temptation to pass the buck, dodge the drama or delegate the authority to a friendly minority. Immerse yourself in the complex, emotional, maddening mess our industry has allowed to fester for generations—and strive to solve it.

Albert Einstein declared, “Insanity [is] doing the same thing over and over again and expecting different results.”

Ms. Hill, here’s your opportunity to stop the insanity.

P.S. The $250,000 contribution, while arguably generous, appears to be well short of the actual needs. The university has already identified requiring $750,000 annually to achieve its goals. In many respects, the John H. Johnson School of Communications is about to experience the types of budgetary obstacles traditionally faced by minority advertising agencies. That is, folks are asked to deliver ideal results with substandard finances. Surely an organization that still holds its conventions at swanky locales like Laguna Niguel can find proper funding. We’re not suggesting the loot be withdrawn from the 4As’ coffers. Perhaps the whole industry should foot the bill, as the initiative will benefit us all. Impose a diversity tax for 4As member agencies. Have the accountants at IPG formulate a fair and effective payment scheme, where the individual amounts are percentages based on agency size versus a flat fee for everyone. Do the right thing.
Posted by HighJive at 1:18 AM