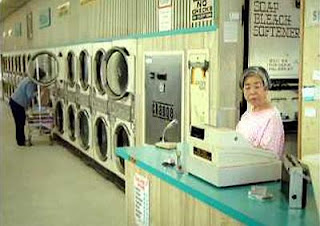 To commemorate Asian Pacific American Heritage Month, it seems appropriate to note the debate ignited by Chicago Sun-Times advertising columnist Lewis Lazare. The writer recently criticized a new commercial for Quiznos starring an Asian American woman working at a Laundromat. Created by Cliff Freeman Advertising, it can be viewed at the Quiznos website. In the spot, the old woman eats a $5 bill; plus, she appears to be in the throes of dementia as she gazes adoringly at her Quiznos sandwich.

A few days later, Lazare published the following reactions to his perspective:

You are right about the Quiznos spot. The Six Flags ad is even more stupid and offensive to Asian Americans. —Mike Kocher

I thought the commercial was an attempt to be funny. You review the same type of ads with young white guys doing stupid antics and don’t mention anyone being insulted. Can’t Asian Americans act stupid to get laughs? —Michael Schimp

I strongly feel the Quiznos ad is insulting, and I’m not Asian. It is really a stupid way to try and get people to buy their brand. —Kathy Repak

Are you Asian American? I wonder how do you know what offends someone else? (I work in a Chinese restaurant, where they slurp their soups and drink loudly without concern—offensive to you or me perhaps, but not to them.) Would you have said the same thing if the actress in question were Caucasian? Probably not. You see a woman of Asian descent. I see a woman. —Lou Lohman

How is the Quiznos ad an insult to Asian Americans? Are they, like the handicapped, not to be made fun of? Are they sacred and therefore not to be displayed in any light less than reverent? Would the ad be acceptable with a white woman? —Michael Curley

Thank you for your opinion piece on the Quiznos ad. I was so shocked when I saw it on television. Somehow, Asian Americans are always portrayed as crazy on television. —Jack Song

While I am not Asian, I think there is still a big difference between funny and offensive. This was funny! —Roger Kelner

I wondered how long it would take for someone to blow the whistle on Quiznos’ obnoxious—and blatantly racist—television ad that pulls its laugh at the expense of a poor old mama-san. —Mary Shen Barnidge

How is this a demeaning commercial? They were able to hire an Asian to do the spot, so it can’t be that bad. My girlfriend is Asian, and she finds the commercial funny. You need to loosen the bow tie and find your funny bone. This ad may not bring more customers into Quiznos, but it may give normal folk a good chuckle. Learn to lighten up. —Chris Murphy

Don’t mean to sound jaded like a dragon, but these debates have become so predictable—plus a pathetic portrait of the culturally clueless characters in the advertising industry and beyond.

It’s almost as if these racial respondents materialize on cue to hit their marks, dropping statements which have become as stereotypical as the imagery that inspires them. From the person who wonders why no one takes offense when Whites are portrayed as stupid to the Chinese restaurant worker allegedly witnessing heathen behavior to the dude with an amused Asian girlfriend to the attacker of political correctness griping that we all need to lighten up (hey, no Freudian slip there), the discussions on these topics reveal a true lack of progress in society at large.

On the multicultural marketing totem pole, Asian advertising agencies in the U.S. are still positioned far below their already-disrespected Latino and Black peers. Which means the overwhelming majority of Asian depictions in commercials and print are coming from the White ad shops. Granted, Asian Americans are starting to make positive appearances in advertising and media. Perhaps it’s partly because the White shops feel more comfortable integrating the “model minority” into messages. Or maybe it’s an offshoot of the popularity of Lucy Liu, Jet Li, Jackie Chan and kung fu movies. Whatever.

But it’s hard to deny the history of representations indicating adfolks consider people of Asian descent to be loud, bizarre, Sumo wrestling, Zen-speaking Laundromat owners inclined to eat anything.

Great post, HighJive. Recently, a white male colleague who often wonders "how come minorities get all up offended at stuff that's just meant to be funny" complained about "a beating" from a woman making sexist remarks. "What did she say?" I asked. He'd obviously been bruised. "She kept referring to 'white men.' As if we're all the same!" he sputtered, indignant.

I am a white male who is not easily offended. But, when I saw that commercial of the Asian woman eating the 5 dollar bill, I thought it was so tasteless even I was offended. On the other hand; I get aroused at the other ad where the brunette is holding a sub as if she's getting ready to suck a huge donkey penis.

I think you guys are all missing the point. The point is that asians are hard core negotiators and grinders when making a deal. The saying among salespeople is that when negotiating a deal they bring their young with them in order to learn how to grind a salesman. Cheap deal Heya!