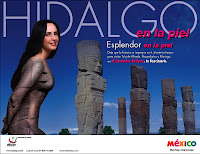 Treasures of a Nation, Not Fodder for an Ad

MEXICO CITY — Eager to bolster tourism, Hidalgo State came up with a novel idea: an advertising campaign featuring a well-known actress wearing Hidalgo’s most eye-popping sites on her flesh.

“Hidalgo, under my skin” was the catch phrase for the ads, which featured the soap opera actress Irán Castillo covered with computer-generated images of mountains, waterfalls and monuments.

But federal officials were unimpressed. They did not object to Ms. Castillo’s lying seminude on the grass with hot-air balloons displayed on her body or lounging in a forest with images of rock faces on her flank or even sprawled on a beautiful mosaic wearing nothing but a beautiful mosaic. “We’re not moralistic,” insisted Benito Taibo, an executive with Mexico’s National Institute for Anthropology and History. “We don’t have an issue with her. She’s a pretty girl.”

But the institute did have an issue with Ms. Castillo’s wearing Mexico’s patrimony on her curvaceous form. Whether it was the stone Atlantes in Tula de Allende or the old aqueduct in Padre Tembleque or the former convent in San Nicolás Tolentino, imprinting one of Mexico’s treasures on a soap opera star was deemed a violation of the law.

The last time Ms. Castillo’s skin caused such a fuss was when she posed seminude for a men’s magazine last summer.

The country’s anthropology institute, based in Mexico City, does more than just serve as Mexico’s monument police. It oversees a vast collection of pyramids, shrines and other attractions, all more than a century old. With 800 researchers, the institute churns out academic treatises that seek to make sense of the country’s past. It also rejects anything seen as exploiting a historical artifact’s dignity.

That means that when a paint company recently asked if it could feature artifacts in a commercial, the institute said no.

The current crop of requests in a thick binder in Mr. Taibo’s office also includes one from the BBC seeking to film a documentary at a pyramid (Sí), another from a university professor seeking to do research at a site (Sí) and a third from a real estate developer who wanted to publish photographs of pyramids in his ads (No).

The institute’s staff pores over a movie script when a production company asks permission to film at a historical site to determine whether the story line is objectionable. “Apocalypto,” Mel Gibson’s 2006 film on the decline of Mayan civilization, received a no.

“We said, ‘You can film anywhere except in our historical zones,’” said Mr. Taibo, who is also a published poet. “It was a film loosely based on history, but it was a particularly bloody interpretation of our past.”

The institute is barraged with all kinds of requests. Many famous Mexicans request permission to hold their weddings atop pyramids or to pose on them for photo sessions.

“Our pyramids are not churches or chapels or clerk’s offices,” Mr. Taibo said of the wedding requests, which are rejected no matter the couple’s star power. “It’s a distorted idea of our patrimony.”

As for the rejection letters, Mr. Taibo said: “We are very polite and we are very kind, but…”

His voice trailed off and he rolled his eyes.

[Read the full story here.]
Posted by HighJive at 2:53 PM