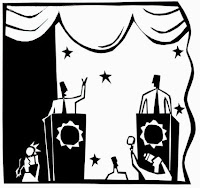 At AdAge.com’s The Big Tent, Tiffany R. Warren presents an odd perspective on the potential ramifications of Barack Obama becoming President of the United States. Some are apparently concerned such an event would threaten diversity initiatives, as people might believe the notion of President Obama signals “the false impression that America has gotten over its racial issues.”

Actually, a different argument ought to be made. That is, the United States is primed to elect a Black man for President, so why do industries like advertising still lag so far behind with diversity? Why is Madison Avenue—the place boasting to be on the leading edge of culture—trailing the general population in such a glaringly pathetic way?
Posted by HighJive at 12:48 PM