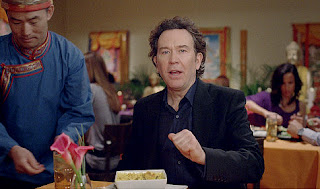 The New York Daily News reported on the grossly insensitive and ignorant Groupon Super Bowl commercial. Guess no one warned the online deal company about the hazards of hiring a culturally clueless White ad agency with a knack for offending the masses.

Groupon’s latest deal: Spend millions on a thirty-second commercial and, in return, get billions of people angry at you.

Activists and Internet users in China are slamming online deals vendor Groupon for an offensive Super Bowl spot they said made light of the Chinese occupation of Tibet.

The first half of the ad showed picturesque landscapes of Tibet while a voiceover by actor Timothy Hutton gravely announced, “The people of Tibet are in trouble. Their very culture is in jeopardy.”

The ad then cut to Hutton in a lively restaurant scene, announcing happily, “But they still whip up an AMAZING fish curry,” and boasting of the 50% discount he got on the meal thanks to Groupon.

The attempt at humor fell flat with angry Internet users who complained that the ad trivialized the decades-long tension between the two nations.

“Groupon seems to have achieved the unique feat of paying $3 [million] to lose customers who previously loved them,” Rohit Bhargava, an influential blogger and marketing professor, posted on Twitter.

The misfire was poorly timed for the daily deals website, which is on the brink of a $15 billion IPO and is reportedly preparing to launch a portal in China.

“Groupon is doomed to failure now in China,” a user posted on Sina Weibo, a Chinese microblogging site similar to Twitter, said “Groupon’s lax approach to the Chinese market is not going to work!”

“Dumb, dumber, dumbest — how stupid can you be to air a pro-Tibet commercial during the Superbowl to promote your company?” wrote Marc van der Chijs, an entrepreneur in Shanghai who founded the popular Chinese video sharing site, Tudou.com

Users on Twitter also hammered the ads, and one created a satirical hash tag, #failedgrouponcommericals, to suggest satirical angles for Groupon to consider for future commercials.

“Breast cancer affects both men and women, but you can totes buy cute bras for 69% off!” the user tweeted.

“Dear #Groupon I really wanted to take you up on that half price Peppi’s deal, but you’re kind of a d—che. I will pay full price instead,” another wrote.

Others charged that Tibetans do not make or eat fish curry, and the website for the Himalayan Restaurant and Bar near Chicago, a restaurant similar to the one mentioned in the ad, does not list fish curry on its menu.

Groupon CEO Andrew Mason said that he didn’t think the ad offensive and called it a “spoof” on typical celebrity-endorsed public service announcements, according to The Wall Street Journal.

Groupon said the ad was part of a plan to raise funds for the plight of people in Tibet, and they also ran spots to benefit other charities featuring Cuba Gooding Jr., Elizabeth Hurley and Sheryl Crow.
Posted by HighJive at 10:04 PM