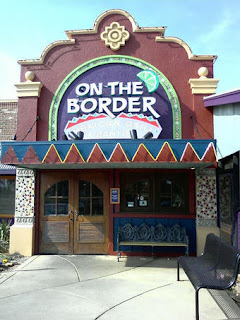 On the Border Taps Barkley as Agency of Record

CHICAGO -- Independent agency Barkley was named agency of record for casual-dining restaurant On the Border Mexican Grill & Cantina after a review. Other agencies in the hunt included Minneapolis-based Olson and independent agency FKM. Energy BBDO, Chicago, previously handled On the Border’s creative duties on a project basis, but opted not to participate.

Barkley’s duties will include brand strategy, national creative, media strategy, digital marketing, in-store merchandising and menu design. A national campaign for On the Border is expected to launch this summer.

The win comes on the heels of Barkley’s recent agency-of-record win—without a review—for Krispy Kreme as well as the loss of most of its Sonic business. Barkley and Sonic in October mainly ended their 17-year relationship after Sonic launched a review of its $100 million creative and media account. Barkley, which declined to participate, ended up retaining a few portions of the business, mostly assignments in PR and a national cause-branding campaign.

“We have been in a thorough search for a true strategic-business partner,” Steve Clark, CEO of On the Border, said in a statement. “Throughout the pitch, Barkley demonstrated a clear understanding of the restaurant business and a passion for the On the Border brand and its potential. We have challenged them to meet our growing business and marketing goals and have no doubt they are up to the task.”

On the Border spent $3.9 million for the first 11 months of 2010, according to Kantar Media. Brinker International, parent company of Chili’s and Maggiano’s Little Italy, in July 2010 sold On the Border to OTB Acquisition, an affiliate of San Francisco-based private-equity firm Golden Gate Capital. On the Border has 160 franchised and corporately-owned restaurants in the U.S. and internationally.

I wouldn't normally hijack a comment post for this, but I couldn't find a way to submit this by email or any other means. There are a couple of ads for a spa in Delhi that I thought would interest you:

I suppose the execution is clever - but if these are ads for a spa in India, and they're targeting Indian women ... why do the body parts appear to be Caucasian? Is there something wrong with "loving thy body" if it's brown?

The ad agency appears to have employed no one but Indians on the project, which just leaves me scratching my head.

Potential answer to your queries here.

¡ay, caramba! what self-respecting hispanic agency would want them on their roster?! on the border serves up nasty, microwaved-tv-dinner style texmex, the texture and flavor of cardboard. yeah...i ate that.