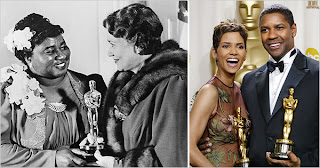 By Manohla Dargis and A.O. Scott

CRAMMED into this year’s field of 10 best picture Oscar nominees are British aristocrats, Volvo-driving Los Angeles lesbians, a flock of swans, a gaggle of Harvard computer geeks, clans of Massachusetts fighters and Missouri meth dealers, as well as 19th-century bounty hunters, dream detectives and animated toys. It’s a fairly diverse selection in terms of genre, topic, sensibility, style and ambition. But it’s also more racially homogenous — more white — than the 10 films that were up for best picture in 1940, when Hattie McDaniel became the first black American to win an Oscar for her role as Mammy in “Gone With the Wind.” In view of recent history the whiteness of the 2011 Academy Awards is a little blinding.

Nine years ago, when Denzel Washington and Halle Berry won his and her Oscars — he was only the second African-American man to win best actor, and she was the first African-American woman to win best actress — each took a moment to look back at the performers from earlier generations who had struggled against prejudice and fought to claim the recognition too often denied them.

“This moment is so much bigger than me,” Ms. Berry said, before convulsing with sobs. “This moment is for Dorothy Dandridge, Lena Horne, Diahann Carroll.” When Mr. Washington took the stage, he praised God and then recognized another higher power, Sidney Poitier, who received an honorary Academy Award earlier that evening for helping to dismantle the color line in film.” “I’ll always be chasing you, Sidney,” Mr. Washington said, holding his Oscar toward Mr. Poitier, who had won his own best actor prize in 1964 for “The Lilies of the Field.” “I’ll always be following in your footsteps.”

Real change seemed to have come to movies or at least the Academy, which had given statuettes to a total of seven black actors in the previous 73 years. After Mr. Washington and Ms. Berry, there would be Jamie Foxx and Forest Whitaker (both best actors); Morgan Freeman (best supporting actor); Jennifer Hudson and Mo’Nique (best supporting actresses). The consolidation of a black presence in the movies and television did not signal the arrival of a postracial Hollywood any more than the election of Barack Obama in 2008 spelled the end of America’s 400-year-old racial drama. But it was possible, over much of the past decade, to believe that a few of the old demons of suspicion and exclusion might finally be laid to rest.

Are the coming Oscars an anomaly, or an unsettling sign of the times? The Academy, in any case, does not work in a vacuum. A look back at the American films of 2010 reveals fewer of the kinds of movies — biographies like “Ray” and urban dramas like “Training Day” — that have propelled black actors, screenwriters and directors into contention in the recent past. With a few exceptions, like the romance “Just Wright” and the ghetto farce “Lottery Ticket,” it was perhaps the whitest year for Hollywood since the post-Richard Pryor, pre-Spike Lee 1980s. The superhero, fantasy and action genres were drained of color. The urban dramas were set in Irish-American New England neighborhoods. Even the male-male buddy picture, a staple of interracial bonding since 1958, when Mr. Poitier and Tony Curtis were chained together in “The Defiant Ones,” has become a largely white-on-white affair.

The possibility that a new black independent film movement — or even a genuinely crossover cinema — would emerge in the wake of “Precious: Based on the Novel ‘Push’ by Sapphire,” now seems as remote as it did before this art-house phenomenon made its way, assisted by Oprah Winfrey and Tyler Perry, from the Sundance Film Festival to the Oscars. But while Ms. Winfrey and Mr. Perry, as executive producers, brought attention to this story of an abused black teenage girl, “Precious” now looks more like a one-off than a harbinger of change, much like another of last year’s nominees, “The Princess and the Frog,” the first Disney movie with a black princess. (The latest Disney princess, Rapunzel in “Tangled,” is as blond as Sleeping Beauty back in 1959.)

What happened? Is 2010 an exception to a general rule of growing diversity? Or has Hollywood, a supposed bastion of liberalism so eager in 2008 to help Mr. Obama make it to the White House, slid back into its old, timid ways? Can it be that the president’s status as the most visible and powerful African-American man in the world has inaugurated a new era of racial confusion — or perhaps a crisis in representation? Mr. Obama’s complex, seemingly contradictory identity as both a man (black, white, mixed) and a politician (right, left, center) have inspired puzzlement among his supporters who want him to be one thing and detractors who fear that he might be something else.

Read the full story here.
Posted by HighJive at 7:28 PM