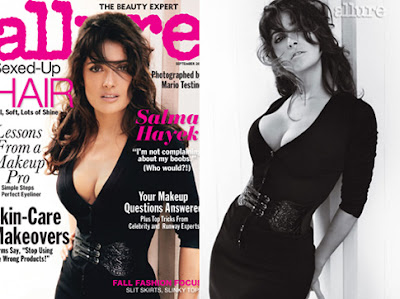 Salma Hayek embraces her curves in Allure: ‘I’m not complaining’ about my breasts

Salma Hayek apparently can have it all.

The actress, 44, not only manages a film career, a 3-year-old daughter and a new cosmetics line for CVS, she’s appearing on the cover of the September issue of Allure looking as if she doesn’t have a worry in the world.

But since Hayek herself has said that’s definitely not the case, she’s doing something right to keep looking young.

Whatever it is, though, doesn’t involve a needle or knife.

“I’ve never had anything done on my face—I’ve never had dermabrasion or peels or injections of any kind, nothing,” she said to Allure.

One thing that Hayek has changed over the years is her image. She learned early on that to become a star, she had to project a certain type of energy.

“When I first started, I found that I had to play the part of something they could swallow in Hollywood, which was the sexy Latin girl, I was not dressing like that in Mexico,” she said.

Something else that might have opened a few doors for the stunner? “My boobs, they’re not bad, by the way. I’m not complaining about them.”

The “Frida” star barely seems to complain at all.

No small feat considering she recently said to USA Today that motherhood was “all-consuming,” and that her luxury brand titan husband Francois-Henri Pinault often laughs at her for constantly complaining how tired she is.

You wouldn’t know it from looking at the Allure photos, shot by superstar photographer Mario Testino, that appear in the magazine.

Perhaps Hayek’s just lucky—or maybe she’s been dipping into her own product. The skin care line, called Nuance, was inspired by Hayek’s childhood in Mexico, where her grandmother worked as an aesthetician.  ”I’ve been working on this for years,” said the actress, who claimed to have tested products on herself. “The stuff is really, really, really good.” 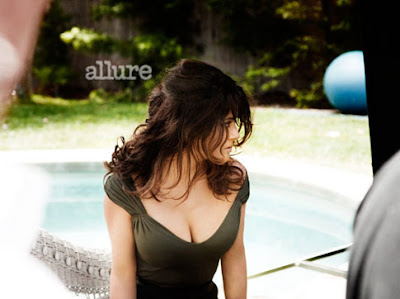 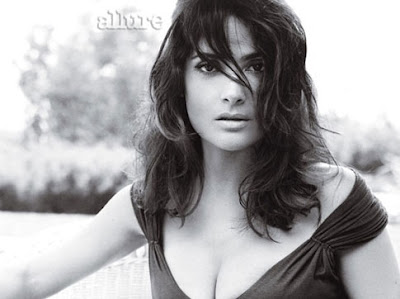