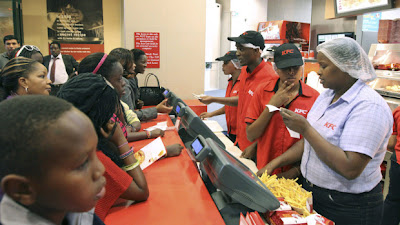 NAIROBI, Kenya – You can’t buy a Big Mac in Kenya. There are no Burger Kings. But there’s good news for chicken lovers: KFC just opened its first restaurant in East Africa.

The shiny red-and-white KFC in the new wing of an established Nairobi mall is the first American fast food outlet in East Africa’s most developed economy, and there are indications its entrance could herald a rush of U.S. chains into this untouched but potentially lucrative landscape.

The major reason that neither golden arches or Whoppers are found in Nairobi is concern over the supply chain. KFC investors worked with a Kenyan chicken supplier for more than a year to bring it up to the quality control standards demanded by KFC’s parent company, Yum Brands (YUM), based in Louisville, Ky.

The restaurant’s Aug. 11 opening was met with long lines of enthusiastic customers. Some waited up to 90 minutes to be served.

At 2 p.m. Tuesday, about 40 people stood in a single line that flowed to five cash registers. Most of the restaurant’s 100 seats were filled.

Customers Zahir and Rahat Lalji smiled as they ate a Zinger sandwich and a two-piece chicken meal. Rahat Lalji said she had been anticipating the opening for months.

“We really appreciate that this KFC came to Kenya after many years. We’re really happy it’s here,” said Zahir Lalji, a 36-year-old in the transportation business who studied in Canada and worked at a McDonald’s there.

“We’re hoping McDonald’s will come in,” he said. “Pizza Hut, Dunkin’ Donuts. It’s an open market for those with investment capital.”

Gavin Bell, the restaurant’s general manager, said KFC’s Kenyan chicken supplier — Kenchic — had to make more policy and procedural changes in the last year than in the company’s first 20, including ensuring that the chicken was kept cold “from farm to fork” and that supplies could be easily traced in the event of recalls. Calls to Kenchic for interviews were not answered.

“Those are tall orders for companies that haven’t based themselves on that,” Bell said. “Those are standard practice in Europe, America, Australia. However in this part of the world we are raising the benchmarks of the supply chain, and the hospitality standards at the same time.”

David Kincheloe, president of the U.S. group National Restaurant Consultants, said he began looking into a KFC franchise in Kenya for a different investor 2 years ago, but the biggest obstacle was the supply chain. Kincheloe said it’s logical that KFC is paving the way for more U.S. brands.

“Yum Brands is working their way into the African market,” he said, referring to KFC’s parent company. “Once you’re able to get KFC in and you’re able to work out the issues with the supply chain maybe you’ll see a Long John Silver’s, a Pizza Hut, a Taco Bell.”

The Nairobi KFC investor group includes a man whose family owns 40 KFC restaurants in South Africa, and there are plans for expansion here. Two more KFCs are slated to open in Nairobi this year, and Bell said the group wants to open 15 restaurants in Kenya, Tanzania and Uganda in the next three years.

Bell said he believes McDonald’s doesn’t want to be left out of East Africa. “It’s only a matter of time … and a matter of finding the right partnership for the brand, the franchisee and the franchisor,” he said of a possible McDonald’s entry. McDonald’s didn’t return a call seeking comment.

The national chairman of the Kenyan National Chamber of Commerce and Industry, Laban Onditi, said the fact that KFC chose to open in Kenya first, among all other East African countries, shows the country is an investment destination.

“In Kenya there is still a very virgin market that has not been fully tapped,” he said.

Kenya does have fast food restaurants from South Africa, like the hamburger restaurant Steers. It also has Pizza Inn and Chicken Inn, but no American chains until now.

Chicken Inn is where Albunus Kithokoi was working until he landed a job as a KFC manager. His training included more than three months working at KFC outlets in South Africa. When the 37-year-old opened the restaurant’s glass doors for business, he folded them up near a sign explaining how Colonel Sanders opened his first restaurant in Kentucky in 1939.

“This is a brand that everyone knows. They say the queue is long, but it’s worth it. They don’t mind the wait,” Kithokoi said.

Among the many groups of children at KFC was Beverly Onyango, who turned 12 on Tuesday. Onyango, who has done quite a bit of international travel and is familiar with American fast food, named KFC as her favorite restaurant. She’s eaten at outlets in Dubai and Thailand, but is happy to finally have one in Nairobi.

“Not having to go somewhere else is good,” she said.
Posted by HighJive at 8:43 AM