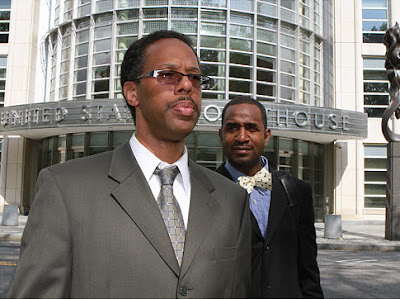 The New York Fire Department is so racism-riddled that just weeks after Sept. 11, 2001, someone defaced a flyer honoring the black Bravest who died, an FDNY captain testified Monday.

The flyer, announcing a memorial service for black firefighters, was posted on a bulletin board at the Ladder 131 firehouse in Red Hook, Brooklyn.

Somebody scrawled, “What about the white guys?” and added a list of black entertainers, including The Jackson 5, Gary Coleman, Fat Albert, Tupac Shakur and Sean Combs.

The word “black” was written over the request that guests wear a dress uniform “with white gloves.”

“It speaks for itself,” said Capt. Paul Washington, 49, former president of the Vulcan Society, a fraternal organization for black firefighters.

He said that after he intervened, a white firefighter came forward to take responsibility and was punished “in an unofficial manner.”

Washington was testifying in Brooklyn Federal Court in the third week of a federal discrimination trial against the department.

The 23-year veteran recalled how, as a young firefighter in the mid-1990s, he overheard the men in an all-white firehouse use the N-word to describe whoever was assigned to do that day’s menial tasks, like mopping up a spill.

He said complaining about racial incidents would lead a firefighter to be “effectively ostracized” by his colleagues.

“You’re going to be shunned,” he said. “Things like this can be very hurtful to your career.”

The Vulcan Society is asking him to monitor the FDNY as it reforms its practices. It also seeks damages for those harmed by an alleged hiring bias.

New York’s population is 26% black but only 3% of firefighters are black, the plaintiffs say.

Much of Monday’s testimony was dedicated to outlining the many benefits of being a firefighter - which the plaintiffs say are being denied to minority-group members.

The perks include an extremely flexible schedule, free time while on duty and the satisfaction of helping others.

Michael Marshall, who has been on the job for nearly 30 years, recounted the community’s appreciation, from his doctor - who would never accept a co-pay - to a man who offered him a cartload of vodka as a token of gratitude.

“There’s nothing more rewarding than saving a life,” Marshall said.
Posted by HighJive at 5:03 PM