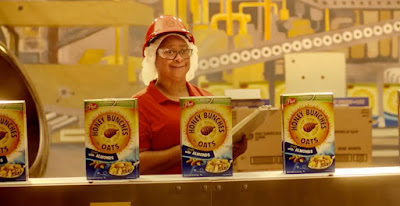 The Honey Bunches of Oats lady is coming out of retirement! The beloved former employee, whose real name is Diana Hunter, was the face of the cereal for many years, but stepped away from her job at Post (the makers of Honey Bunches of Oats) and her role in the breakfast food’s ads when she retired in 2017.

However, in the midst of declining sales across the cereal industry, Post has brought Hunter back for a new, rhyming TV spot, which debuts on Tuesday, October 9. In the 30-second commercial, which is part of a larger new ad campaign, Hunter is shown in her trademark red uniform standing alongside a conveyor belt of Honey Bunches of Oats cereal boxes, a position she has occupied in several other ads for the cereal.

The new “rhymes with delicious” spot features Hunter and another employee making up playful rhymes about Honey Bunches of Oats while they’re hard at work. “Crispy, crunchy bunches, for breakfast, brunch and lunch, to fill your bags and totes, with Honey Bunches of Oats,” Hunter sings.

For Post, Hunter’s retirement had the company at an “important juncture,” according to a statement to Ad Agefrom chief managing officer Roxanne Bernstein. Hunter, the longtime face of the breakfast staple, began working for the corporation in 1976 and appeared in her first Honey Bunches of Oats commercial in 2002.

“The cereal category is notoriously plentiful. With choice-overload in the cereal aisle, there’s no question why,” Bernstein added. That’s part of the reason why Post elected to bring Hunter back as the company kicked off a new campaign, which was created by ad agency Argonaut. Though the additional ads don’t feature Hunter, they do stick with the fun sing-songy rhyming scheme that’s used in her spot, and each ad ends with “Honey Bunches of Oats.”

“This really is about multiplicity, we want to really surround people with this song, with this kind of rhyme-y technique,” Hunter Hindman, founder and chief creative of Argonaut told Ad Age.

He added: ”We’re really trying to surround people with this interesting kind of take on a mnemonic device of rhyming in every medium we can.”