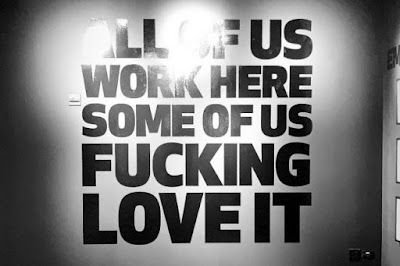 Advertising Age reported on the latest publicity stunt from Havas Chicago, a White advertising agency that seems to generate more press from self-promotion than client promotion. Apparently, agency leadership doesn’t appreciate anonymous online criticism from staffers, inspiring a campaign declaring, “All of us work here some of us fucking love it.” Oddly enough, the campaign references members of the HR department, who likely approved offensive language that could warrant a legitimate complaint to HR. Contrary to anything Havas leaders might say about encouraging constructive companywide dialogue, the campaign appears to tell haters to fuck off and find another job. It’s fighting bullying with bullying—and bullshit. According to Adweek, the campaign collateral “also lists contacts for recruiters from Chicago agencies like FCB, Digitas, Upshot and mcgarrybowen.” You know, the shitty agencies that don’t compete with Havas. The shitty agencies, incidentally, generate more press from paying clients than pissy coworkers. Oh, and Havas honchos are cordially invited to read this 2007 post on the global topic.

Havas Chicago is responding to negative comments made about the agency and its employees on anonymous industry app Fishbowl with an anti-bullying-themed art installation and a brochure that encourages disgruntled employees to look elsewhere.

The installation, which opened on Friday, was showcased on Chief Creative Officer and Chairman Jason Peterson’s Instagram account. His posts show a photo of a wall with the words “All of us work here some of us fucking love it,” and another of a wall with the words “Employee of the month” above a collection of framed anonymous Fishbowl comments saying things like “The laughing stock in charge is obssesed (sic) with his 1M fake followers” or “I’m embarrassed to work at havas (sic) as well.” (Peterson has 1.1 million followers on Instagram.)

There is also Instagram video of the wall on his Instagram captioned, “Your hate is my anthem.”

Peterson’s posts from Friday evening also include images from a brochure, available in the agency, with the same “All of us work here some of us fucking love it” message. The inside has a section introduced as “Conscious Uncoupling.”

The brochure reads: “We assume you love working at Havas but if you are not happy in your role, you don’t have to continue feeling that way. Conversely, if we see that this is not your jam, we are going to raise this with you. We want you to be happy. We won’t hold this against you, we’ve got your back … Talk to your Manager or your Talent Management Partner to get the conversation started.”

That document lists three HR people at the company. It also lists contacts for recruiters from Chicago agencies like FCB, Digitas, Upshot and McGarryBowen.

Tatia Torrey, president and chief client officer at Havas Chicago, said in a statement that “A group of our employees brought this idea to us, they wanted to address some of the hateful online commentary and bullying that exists around some of our employees and our greater industry and expose the damage that it does to people who love their work and this business.” Her statement noted that the agency uses its office as an installation space to express what’s happening culturally, and has addressed “tough, but real” topics like suicide awareness, immigration, gender equality and racism in the workplace.

“We took it a step further and sent out material that encouraged our staff to talk to us openly if they have real issues, and quite frankly, to consider their choices in their work,” she said. “Bullying is something that we simply won’t tolerate. If there are issues amongst our business, we would rather address them openly, ultimately with the goal of making this the best possible place to work for our amazing staff that work so hard.”

The shop said multiple people in the agency, including Peterson, stepped forward to share comments made about them personally.

The Peterson posts come a month and a half after an internal video popped up on Fishbowl and prompted some negative industry commentary. In the video, which featured Peterson and Havas Creative North America CEO and Chairman Paul Marobella, Peterson said shops like Leo Burnett, FCB and BBDO or other “shitty agencies” aren’t Havas’ competition, but instead its competition is “kids with iPhones and millions of YouTube followers.”

Asked at the time to respond to criticisms that he had called other agencies “shitty,” Peterson said the video was internal, so if any Havas employees “want to go work at these other agencies please by all means go and do it.”

In a statement regarding the art installation, Peterson said, “Havas Chicago is a unique creative company that requires unique creative people with the right level of commitment, courage and contribution to what that means. In the case where there is not a mutual fit, we’d rather know and address it now and encourage those employees to pursue what’s best for them in their careers, while we maintain an amazing creative team here who share a vision and point of view. Constructive discussion and criticism is just that—constructive,” his statement reads. “What we simply will not tolerate is hate or bullying while hiding behind anonymous sources within our business.”

The agency says since Peterson posted about the installation on his Instagram, he has received more than 350 direct messages from people interested in working for Havas (many of which he posted on his personal Instagram account stories).

In an emailed message to employees, Torrey said the agency is “not a typical agency.”

“We are loud and proud and we are not for everyone,” she wrote in part. “...We value and promote social media. Yet, the anonymity with some platforms allows for pointed and painful comments at times. Recently many of those comments have been directed at our agency, our environment and the people who work here. We are not O.K. with that. In a manner that is truly Havas CHI, we are bringing this to the forefront. We created a lobby installation to address it head on. We want to talk about it.”

The agency says the installation coincided with the launch of Monica Lewinsky’s anti-bullying campaign and will likely last until mid-month when it will make way for a breast cancer awareness installation.

When asked for comment, Fishbowl chief operating officer and co-founder Loren Appin said in a statement that the app’s community guidelines are thorough and are “not only explicitly against bullying, but also against unconstructive, excessive negativity.”

“We have no opinion on how [Havas has] chosen to interact with their own employees, but do believe the representation of Fishbowl as a place for professionals to bully one another is entirely false,” he said.