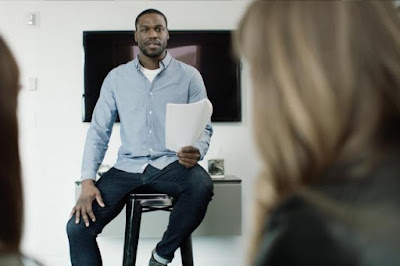 Advertising Age spotlighted a diversity and inclusion campaign from OBERLAND that is perplexing at best and pathetic at least. The New York-based shop explained the concept as follows:

Most of us in the ad industry are not racist, sexist, homophobic, bigoted or ageist. But there are times when our intent and our actions are misaligned. That’s why we created a series of short videos that address microaggressions and unconscious bias that we have witnessed, seen and heard of in the industry.

The videos present a culturally clueless casting call and ageist job interview, replete with stereotypical depictions of White people. The exaggerations are disturbing on a few levels. First, such over-the-top performances make the executions feel hackneyed. Second, microaggressions and unconscious bias work in much more subtle and sinister ways, so the cartoonish characters fail to communicate the seriousness—or the reality—of the global problems. Third, if the videos do indeed display activities OBERLAND staffers “have witnessed, seen and heard of” taking place in adland, why didn’t the witnesses speak out when the offenses actually occurred versus waiting to produce not-so-clever commercials?

In 2019, we’re hiring outside auditors to examine our diversity and inclusion procedures, our mental health support, parity and harassment policies and our environmental footprint. We plan to publicly post the results and solutions.

Hiring outside auditors? Heaven forbid an advertising agency might consider simply hiring more minorities instead of hiring outside auditors to tell them to start hiring more minorities. It will be interesting to learn the identity of the outside auditors. Or maybe not, especially if it turns out to be an entity offering certifications and awards for doing the right thing. Additionally, given the laundry list of procedures and policies to be audited, it’s clear that OBERLAND is examining divertsity versus diversity. Finally, why bother auditing for diversity when it’s easier to just scan the roster of agency employees?

Hey, agencies: Your owners are biased

“I’m wondering if we could get one that’s a little more … street?” one director asks him, wincing a bit at the racially charged euphemism she’s just used. After a long pause, he obliges.Is this interaction racist? What about racist-ish? That’s the question posed by a pair of short videos, “Nothing Changes If We Don’t,” from New York agency Oberland that tackle issues of discrimination and diversity in the ad industry, particularly in scenarios that some might consider not quite, well, black or white.

The other video, on ageism, pits a 43-year-old job applicant against a dismissive 20-something interviewer. “The grandkids gave you some pointers?” the younger man chides, when the topic of social media comes up.

The films are part of a yearlong effort that the founders of Oberland say they’re undertaking in the hope it will spark other agencies to make changes in the ways they hire and operate.

“A lot of the organizations that are trying to promote and drive change are started by people who have borne the cost of racism and sexism and institutional preferences for straight, white guys,” says Drew Train, president of Oberland. “But a lot of agency owners are white guys.” (Train runs the agency with Executive Creative Director Bill Oberlander, and, yes, both are white.) “Nothing is going to change if the agency owners don’t change [their behavior] first.”

Oberland is defining change beyond bias. Over the next year, it says, it’s hiring outside auditors to examine its environmental footprint, mental health support, diversity and inclusion procedures, wage parity and harassment policies, and it plans to publicly post the results and any remedies. Oberland is a benefit corporation, a legal status granted by 33 states to for-profit companies that have a positive social impact, and was recently certified as a B Corporation, a designation issued by the nonprofit B Lab indicating that a company has exceeded high standards for sustainability, accountability and transparency.

More videos on topics like sex discrimination and harassment are in the works. Like the first two, they’ll each include an influencer. The racism spot, for example, ends with a message from Keni Thacker, diversity advocate and event technology specialist at J. Walter Thompson. Cindy Gallop, former BBH chair and founder of IfWeRanTheWorld, appears at the end of the spot on ageism.

“As a 58-year-old woman, this is especially dear to my heart,” says Gallop. “It’s holding a mirror up to the behavior that happens in a way that absolutely forces recognition of it. Hopefully, it will make people think twice when they feel themselves falling into that standard response.”

The vignettes are based on real-life interactions experienced or observed by Oberland creatives. “We have a creative team of 10, so it was like sitting down at a family dinner,” says Oberlander of the process. Team members wrote down memories of discrimination, and a table read of those interactions followed, much like on a film set.

There was also a discussion about how to include proper representation in a video series where many of the roles are for discriminatory characters.

“There was a lot of conversation about whether the casting directors in the racism spot should both be white,” says Oberlander. “Or maybe they should be men, or a man and a woman.” In the end, they settled on two white women, as many casting directors are women, and the ageism spot stars two men.

The two videos are available on Oberland’s YouTube channel, and the agency plans to release an additional video each quarter.

“Everybody understands when the Papa John’s founder makes a slur on a phone call, that’s racism,” says Train. “That’s an easy one. But the conversation in the racism spot, that’s slightly less obvious. In the ageism spot, the biases are subtle. The goal is to tease out these everyday situations so people can self-reflect.”