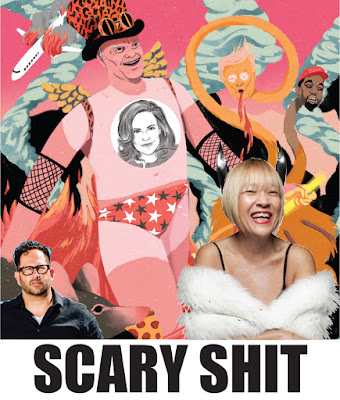 Advertising Age published a list titled, “What Scares Me Right Now…” featuring a variety of industry figures who shared their fears. Three comments worth noting:

I’m scared that the Harvey Weinsteins of our industry think they’ve gotten away with it and will carry on doing it.

Okay, but Gallop declined to offer her bold opinions when probed on the Wendy Clark-Ted Royer fiasco, a scenario that completely connects to what scares Gallop right now. Keep in mind, she certainly didn’t hesitate to blast WPP for continuing to employ Gustavo Martinez while he was in the middle of a discrimination lawsuit against JWT and the White holding company. Isn’t it scarier to see a Harvey Weinstein-type invited back by a major White advertising agency whose leaders include a Pioneer of Diversity and a woman with a restless ambition for inclusive justice? This sort of stuff should have Gallop shitting her knickers, no?

What scares me right now is a backlash against women, the LGBTQ community, immigrants, people of color and other populations that have fought so hard for protections of their rights. The atmosphere of disinformation and otherizing in this administration is unprecedented and deeply destructive. Some days, this scares me. Most days, it whips me into a rage that propels me to keep fighting.

What’s most scary is when Gordon’s rage propels her to keep writing angry Op-Eds that don’t make sense. When that happens—and it happens much too frequently—be afraid, be very afraid.

The scariest thing in the world today is our crisis of leadership. Sure, there are always ups and downs, peaks and valleys, mad men, wars, corruption, money grabs, income inequality, the strangling of Mother Earth and on and on—but we always have a few leaders in power who the world can look up to. Currently, we lack a moral compass to guide us. We don't know right from wrong and decency and politeness have all but disappeared. We can throw up the Bat-Signal, but there is nobody there to answer the call.

While Harris was presumably referencing political officials in the U.S. and abroad, his comments apply directly to the crisis of leadership in adland, where moral compasses are spinning aimlessly, right and wrong are highly subjective terms and decency and politeness are delegated to and fabricated by PR crisis managers. Even Harris’ Bat-Signal reference underscores the true issue—that is, “leaders” hope that a masked hero will appear to save the day. Um, true leaders strive to solve problems without rescuing interventions from outside vigilantes.