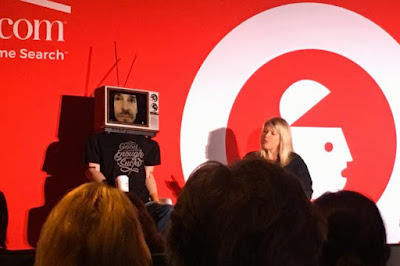 Advertising Age reported on CP+B Chief Creative Engineer Alex Bogusky “appearing” at Advertising Week. In reference to the state of the industry, Bogusky said, “All our wounds are self-inflicted.” He also remarked, “Even a great day in advertising includes three swift kicks to the groin.” Hey, former CP+B CCO Ralph Watson would probably agree—and his alleged victims would likely be happy to deliver the blows. But Bogusky’s groin comment makes one wonder if he really is ready to return to Adland 2018. As White women, sexual harassment and divertsity grab so many headlines, Bogusky should be more careful with his genitalia gender-specific perspectives. In the advertising world, all the cultural cluelessness is self-inflicted too.

Alex Bogusky at Advertising Week: ‘All our wounds are self inflicted’

Alex Bogusky’s coming out since returning to CP&B was typically atypical.

Bogusky appeared at an Advertising Week panel in the form of mannequin wearing a “Good enough sucks” t-shirt and with a TV for a head. The TV streamed video of Bogusky, who was named CP&B’s chief creative engineer in August after an eight-year absence.

“I left the building eight years ago and it was like going into a coma and waking up eight years later,” Bogusky said through the TV. “I walked out and walked into a completely different place.”

He appeared, so to speak, in a Q&A with CP&B President Danielle Aldrich, and introduced by co-founder Chuck Porter, who was frank about the impetus for bringing Bogusky back. (They did not explain why Bogusky didn’t take the stage in person.) Principal Chuck Porter said CP&B had become more conservative in the years since and lost the mojo that led it to be named Ad Age’s Agency of the Decade in 2008.

“We weren’t a leader anymore,” said Porter. He made an exception for Brazil, where a CP&B outpost is doing standout creative work. “It was so clear, they were doing what we used to do,” he said, “except in Portugese.”

Bogusky, he said, is charged with restoring “the DNA” that made it CP&B in the first place.

Bogusky said CP&B has taken on more of a New York agency culture, at the expense of the maverick feel it got in part from its nonconformist beginnings in Miami. (It is now headquartered in Boulder, Colorado.) “You can get homogenized if you don’t cook in your own juices.”

The agency industry has meanwhile become commoditized and squeezed, suffering incursions by consulting companies and the pressure to help agency holding companies impress investors every quarter. He later said the industry’s wounds “have been self-inflicted.”

“Even a great day in advertising includes three swift kicks to the groin,” Bogusky said.

CP&B’s earlier maker culture was what drew great talent to it, Bogusky said. Now, the people he wants are the type who join an agency less to be part of it than to change it, he said.

Bogusky also said he is frustrated by creatives who complain that budgets are too small: “I tell them with $150,000 in many parts of the country you can build a house.” Much of that is immaterial anyway, because with today’s realities, lavishly produced TV extravaganzas are less of a factor and the best work is often highly creative and less expensive to produce, he said.

Bogusky noted that in the eight years after he left CP&B, he had not kept up with award winners. But as he prepared to return, he looked at recent Cannes winners only to discover that he, as a consumer, had seen few to none of the decorated campaigns in his daily life. That proves that creatives should not be “focus groups” for one another and should remember they are writing for the consumer, not themselves, he said.

And then there was the ping pong table. Bogusky said that during his tenure, the agency used to laugh at shops with that played basketball or ping pong at work, because, he said, none of that was nearly as fun as creating advertising. So he was dismayed on his return to find a ping pong table stashed in a closet. Bogusky said he considered burning it, but is giving it away to avoid being wasteful.

But whether Bogusky, sometimes hailed as a creative savior, is making an impact inside or outside of the agency is yet to be seen. The theater where CP&B was presenting was under three quarters full. And one marketing consultant, when asked whether the return of Bogusky would give the industry a jolt, said, “A lot of young creatives don’t even know who he is.”