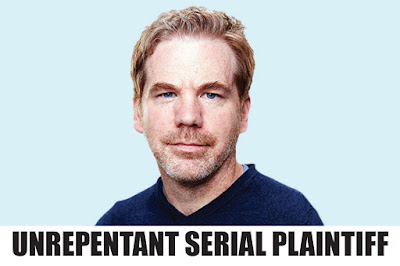 Adweek reported on the second phase of former CP+B CCO Ralph Watson’s legal actions, whereby the alleged unrepentant serial predator complemented his lawsuit against Diet Madison Avenue with another lawsuit targeting CP+B and the MDC Partners holding company. The latest suit charges CP+B and MDC Partners with wrongful termination, age discrimination, reverse sex discrimination and more. Wow, this guy claims to be the victim of more discrimination than the average person of color in adland. Meanwhile, Diet Madison Avenue claims that freedom of speech allows for defamation. If it all goes to trial, a judge or jury will ultimately decide which argument is less bullshit.

Ralph Watson, former CCO at Crispin Porter + Bogusky, has filed a second lawsuit that adds his former employer and its parent company to a legal pileup focused on the anonymous Diet Madison Avenue Instagram account.

Watson was fired by CP+B in February after several posts by DMA described him as a sexual “predator” who “targeted and groomed” unnamed young women.

In May, Watson and his lawyer Michael W. Ayotte filed a civil defamation case in the Superior Court of Los Angeles County that focused on the individuals behind the account. Now they have followed with a federal case accusing CP+B and MDC Partners of a range of violations from wrongful termination to age discrimination and “reverse sex” discrimination. Additional defendants include MDC legal counsel Mitchell Gendel, CP+B global CFO Dusty Nelson, and “Jane Does 1-10” as stand-ins for the individuals operating DMA.

Unlike the first case, it does not mention the two anonymous individuals who Watson suspects of being among those who run the account, which was established in late 2017 and earned attention for accusing a series of high-profile men in the ad industry of sexual misbehavior.

As before, the plaintiffs demand a jury trial and $10 million in punitive damages.

“CP+B stands by its decision to terminate Mr. Watson’s employment in February 2018,” read a joint statement from the two companies. “MDC Partners and CP+B intend to vigorously defend themselves and their employees against the litigation commenced on June 29, 2018 by Mr. Watson.”

Spokespeople for both CP+B and MDC Partners declined to elaborate.

Diet Madison Avenue did not respond to messages regarding the new case. The main account went dark soon after news of Watson’s suit first broke, but soon reappeared under a new username.

“At this time, we have no further comment other than to state that we fully stand behind our complaints and look forward to fully clearing my client’s name,” wrote Ayotte, who previously posted the first page of the suit on his website and sent a copy to The New York Times, which reported on the news yesterday. Ayotte told Adweek in May that he planned to subpoena Instagram for this case, citing a “California legal precedent” that he declined to specify. A spokesperson for the Facebook-owned company did not comment at the time.

The crux of the new filing concerns whether CP+B had cause to terminate Watson and whether, in doing so, it violated the contract signed when he joined in 2014.

That agreement included a condition holding that Watson would receive six months salary as compensation in the event of termination “without cause.” In this case, “cause” is defined as “serious, specific and limited grounds” including “nonconformance with the company’s standard business practices” and “policies against racial or sexual discrimination or harassment.”

The suit claims that CP+B knowingly fired Watson as “a direct result of Diet Madison Avenue’s false statements, pressure and interference.” According to the document, agency leadership knew they had breached his contract and had no real evidence supporting the claims made by DMA “because they had undertaken no investigation and/or only a cursory and biased sham investigation in connection with the Diet Madison Avenue’s wholly unsubstantiated attacks.”

One major point in the filing concerns CP+B’s claims that a series of “emails that were sent by Mr. Watson to female employees” justify the “for cause” termination. According to the suit, agency leaders have refused to provide this evidence, despite a company policy which “expressly permits” the search of employee email databases. As such, the plaintiff argues that CP+B had no basis for its termination of Watson, adding that he was never disciplined for any type of improper behavior by CP+B or any previous employers.

In order to back up the first claim, the suit states that, after Watson was fired, “his job duties were performed by substantially younger, less qualified employees.” The plaintiff also contends that MDC, CP+B and their leaders justified the firing via false pretenses, thereby conspiring “in a bad faith effort to quell the Diet Madison Avenue attacks against CP+B.”

The suit does not go into detail regarding the “reverse sex discrimination” complaint beyond stating that Watson filed this claim, alongside the age and retaliation charges, with the Equal Employment Opportunity Commission and Colorado Division of Civil Rights in April.

Reverse discrimination generally describes cases in which members of a majority or privileged group become victims of bias due to their race, color, religion, sex and national origin, as defined in Title VII of the Civil Rights Act of 1964.

If a court of law subpoenas the private messages of the Instagram account, doesn't that mean that every single message about sexual harassment, discrimination, rape or other issues they received, plus the names of the people they named, will be available for the press to read in full?

Because that seems like it might backfire. Instead of one guy being named, won't it be like potentially dozens, with the exacting detail of what they allegedly did?