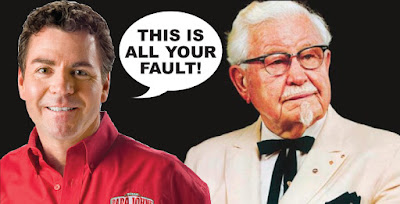 Adweek reported the Papa John’s N-Word Scandal is escalating, as Casey Wasserman—CEO of the company that owns Laundry Service—declared Papa John’s Founder John Schnatter’s charges of extortion are “completely false.” Plus, Adweek stated Forbes claimed that Laundry Service resigned the account after Schnatter allegedly used the N-word and “made other racially insensitive statements” during the infamous conference call. This story has more messed up ingredients than a Papa John’s pizza with the works. On the one hand, Schnatter isn’t getting much respect from his company (where he’s still the majority shareholder), as the man has even been kicked out of his office. However, he’s receiving support from sources including The Patriot Post. On the flipside, Wasserman issued a company memo saying, “All matters pertaining to Laundry Service, Cycle, Wasserman and their clients are strictly confidential…”—which begs the question of how the conference call details were made public. While Wasserman revealed his company now has “a centralized PR strategy to go on the record and refute [Schnatter’s charges],” it seems like he’s not moving fast enough to set the record straight. This is ironic, given that Laundry Service was allegedly offering Papa John’s guidance for dealing with the media. Mark Twain observed, “If you tell the truth, you don’t have to remember anything.” Laundry Service, Wasserman, Papa John’s and Schnatter could all benefit from heeding Twain’s words.

On a side note, MultiCultClassics might have jumped the gun by initially branding Laundry Service as a typical White advertising-media agency. The place boasts being committed to diversity and appears to have an inclusive staff—at least what’s left of the staff after recent layoffs. Papa John’s looks pretty diverse as well. The leadership at the Wasserman-led parent company, not so much.

Company plans ‘to go on the record and refute them’

In the memo, which Adweek acquired, Wasserman CEO Casey Wasserman also advises employees to avoid talking to the press or discussing client business with anyone outside the parent company, Laundry Service or its production division Cycle.

Last Monday, Adweek broke the news that Laundry Service had parted with CEO Jason Stein and approximately 60 employees due to “client attrition.” The following morning, Forbes reported that the agency had resigned the account following a May strategy call in which Schnatter used the N-word and made other racially insensitive statements.

Schnatter subsequently resigned as chairman of the pizza chain.

On Friday, Schnatter claimed in interviews with local TV and radio stations near the company’s headquarters in Louisville, Ky., that unnamed Laundry Service employees had “pressured” him into the conversation and attempted to “extort” his company for $6 million before leaking news of the call to Forbes.

Wasserman strongly denies those statements in the note. He also writes that the company will soon come forward specifically refuting Schnatter’s claims.

“As you all know, there’s been a lot of coverage about Laundry Service and Wasserman related to the Papa John’s situation in the past several days,” the note begins. “The disparaging and outrageous comments about Wasserman and Laundry Service that have been covered are completely false and we have a centralized PR strategy to go on the record and refute them. Until that time we cannot expect the media to know the truth.”

The note tells employees to defer to third-party PR firm Principal Communications Group if a journalist should reach them by phone or in writing, advising them to avoid even providing a “no comment” response.

“To this end there are a lot of journalists making inquiries about Papa John’s and Laundry Service, and those inquiries should continue be referred to our corporate public relations representative, Melissa Zukerman,” the note reads.

It concludes: “All matters pertaining to Laundry Service, Cycle, Wasserman and their clients are strictly confidential and should not be disclosed to anyone outside the company.”

A spokesperson for Laundry Service and Wasserman declined to comment for this story. A Papa John’s representative did not respond to a request for comment by press time.

This morning, The Wall Street Journal reported that Schnatter and his lawyer sent a letter to the company’s board of directors calling his decision to resign “a mistake.”