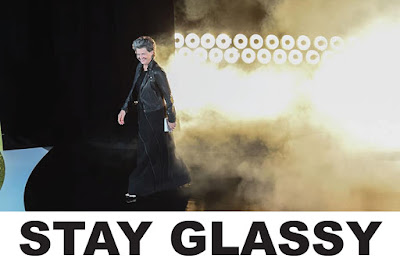 Adweek reported on Badger & Winters Chief Creative Officer Madonna Badger, who presented the Grand Prix award for the Cannes Glass Lion with a contrived speech incorporating references to over fifteen women’s movements. Surprisingly, the speech featured no nods to Diet Madison Avenue. Such an oversight!

While wearing black and presenting award to ‘BloodNormal’

CANNES, France—Madonna Badger stepped on stage wearing black at the Cannes Lions closing awards show Friday night and delivered a stirring speech that summed up several recent movements to lift up women in an industry and world that has often held them back.

“Yes, she is equal, and yes we are definitely women not objects,” she told an audience that included the globe’s most successful advertising professionals. “In the Glass Lion Jury, we stand by tough moms, we are a force of nature, and in our dress of respect, we need a man like you to end the rape tax.

“Watching the worst soap opera, we saw that no conditions apply, and we remember our blood is normal, and #MeToo. Uh oh, looks like time’s up.”

Her speech alluded to the advertising industry’s recent reckoning with sexual harassment as well as broader inequality, and it wove together the names of women’s movements that have leapt up in response. “The rape tax” refers to a project shining a light on the fact that victims are charged an average of $1,000 for hospital visits.

The founder and CCO of Badger & Winters delivered her remarks while presenting the Grand Prix award for the Cannes Glass Lion: The Lion for Change, to an ad campaign about period shame. #BloodNormal, as the ad is called, broke through decades of sanitized ads around period products, showing real blood on pads rather than blue liquid.

And in what has to be a first for Cannes, AMV BBDO’s team brought a giant pool raft shaped like a maxi pad onto the stage as it accepted the gold Lion.

Badger, a jury president, talked candidly with the press earlier in the day about how uncomfortable she and her peers felt at first judging the bold work. Before the experience, she wouldn’t have felt comfortable saying “period” in a crowd. But as it learned more about the campaign, the group’s perception changed.

“To demonstrate the effect this campaign has had on me personally, I’m not afraid to say the word ‘period’ over and over again at a national press conference,” she said.

She shared the full text of her speech with Adweek, which you can read below. 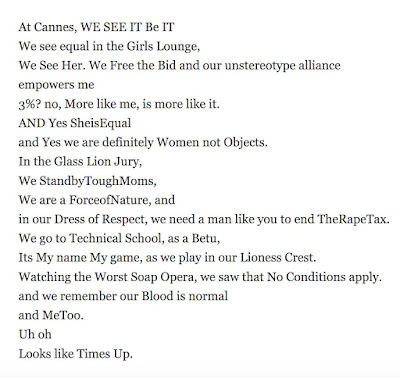 That whole list is like a shout out to movements for, by, about and benefiting white women.

White women who, I may add, sat by and did (and are doing) nothing for POC as they rose through the ranks.

The emperor is wearing a lot of white clothes.