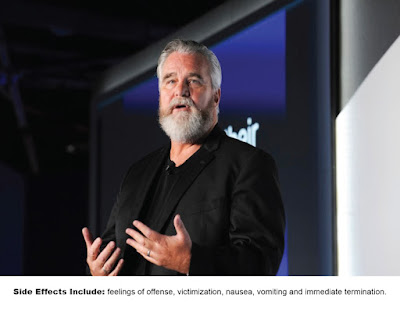 1) Because McCann can’t or won’t divulge details of the violating behavior, and Campaign stated it involved “offensive and inappropriate language,” it’s impossible to know if Perrott’s words were sexist, racist, homophobic, ageist, political, religious, etc.—or a combination of culturally clueless obscenities. This is especially important to Cindy Gallop, Kat Gordon and Diet Madison Avenue, as they’ll be unable to take credit for Perrott’s firing.

2) IPG deserves derision for apparently keeping the affair quiet during Cannes—essentially, the band played on by conducting patronizing propaganda and a blissful breakfast to display faux commitment to divertsity and inclusion, despite having employed veteran violators, bigots and predators in C-suites throughout the holding company. Gotta believe IPG Chairman and CEO Michael Roth must be experiencing writer’s cramp from all the memos penned in recent years.

McCann Health’s global chief creative officer Jeremy Perrott has been fired following “a complaint about a violation” of the company’s code of conduct.

Perrott, who had been with the Interpublic Group company for nearly three decades, was let go in the days leading up to the 2018 Cannes Lions International Festival of Creativity.

A person with knowledge of the matter said the complaint surrounded allegations of “offensive and inappropriate language.”

A statement from McCann reads: “We received a complaint about a violation of our Code of Conduct by McCann Health’s, Jeremy Perrott. As a result, following an investigation, he is no longer with the company.

“Our foremost priority is to foster a workplace where people are respected and valued, and importantly, an environment where people feel safe and protected to come forward to report actions that run counter to our values and code of conduct.”

McCann Health is in the process of replacing Perrott. Other members of his former leadership team are taking on his responsibilities in the interim.