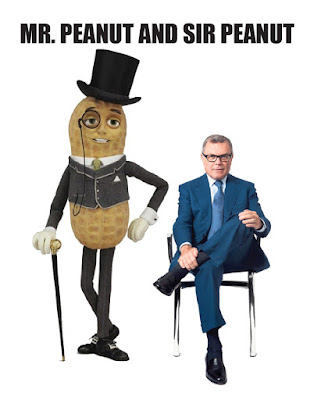 Advertising Age reported Sir Martin Sorrell succeeded in acquiring MediaMonks, which could lead to him losing millions in share awards from his exit package with WPP. Whatever. It seems like only yesterday—versus last April—that Sorrell proclaimed his undying love for WPP. Yet his first major move with S4 Capital involved outbidding his former lover, wooing a Dutch digital production company into the new whorehouse holding company. Sorrell had also assured everyone that his fresh enterprise posed no threat to WPP, insisting S4 was a “peanut” compared to his original empire. Well, it appears Sorrell might lose some money—which is likely peanuts for him—while kicking his ex-partners in the nuts. The ultimate losers, however, are everyone nutty enough to be working for WPP or S4 right now. Smart employees are advised to leave in a Jif.

Sorrell won MediaMonks, but will he lose WPP payout?

Martin Sorrell won the battle to acquire Dutch digital production company MediaMonks. But WPP, the holding company he formally helmed, reiterated on Tuesday that he may lose out on a multi-million dollar payout.

The acquisition by Sorrell’s S4 Capital was confirmed early Tuesday morning in an announcement to the London Stock Exchange. Shareholders of MediaMonks, which has revenues of $129 million, will receive cash and shares in S4 Capital. S4 describes the deal as a merger and says its objective is to “provide clients with digital services, which are agile, efficient, and of premium creative quality.”

“WPP’s lawyers wrote to Sir Martin’s lawyers last week pointing out the breach of his confidentiality undertakings in his approach to Mediamonks after his resignation from WPP,” a WPP spokesman said Tuesday. “Despite subsequent protestations from Sir Martin’s lawyers, we are well aware of the facts and he has jeopardised his LTIP entitlement.”

“LTIP” refers to a long-term incentive plan entitlement for Sorrell, as outlined in a contract from 2008.

Asked whether it would still pay Sorrell the share awards it says he is risking, WPP declined to comment.

As for Sorrell, “Sir Martin strenuously denies the allegation and is confident that the facts will speak for themselves,” said a spokesman.

“The WPP legal position has no merit,” the spokesman added. “We had taken legal advice before moving forward. The legal letters were just a feeble and weak attempt to disrupt our bid—and failed.”

During WPP’s annual general meeting in June, one shareholder pointed out that without further information shareholders would not be able to assess whether a termination package for Sorrell was appropriate. Another asked why Sorrell’s intention to start his own advertising company didn’t constitute “gross misconduct” in and of itself.

The long-term incentive plan outlines that Sorrell is entitled to share awards worth up to approximately $23 million (£20 million) in future payments.

WPP leaders at the June meeting cited Sorrell’s claim that he didn’t see himself as competition. In public appearances and interviews, Sorrell has compared S4 Capital to a “peanut” in comparison to the holding company.

As for his venture competing with his former company, Sorrell said onstage at the Cannes Lions International Festival of Creativity, “I have to admit that some people have peanut allergies.”