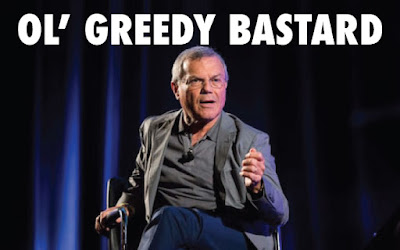 Campaign reported on the launch of S4 Capital, confirming that former WPP Overlord Sir Martin Sorrell is indeed a greedy bastard. The Times corroborated the opinion by revealing Sorrell will control board appointments and major deals at the new company. The guy who claimed, “For the past 33 years, I have spent every single day thinking about the future of WPP,” sure managed to quickly forget his baby and shift his thinking to himself. Amazingly, Sorrell avoided a non-compete clause in his WPP contract, which means he can spend the next 33 years thinking about the destruction of WPP.

Sir Martin Sorrell has confirmed details of his return to the front line of advertising only weeks after leaving WPP, with the launch of a new “multinational communication services business”.

The former WPP chief executive, who left the holding group in April, has this morning announced to the stock market the acquisition of S4 Capital, a newly set-up company, by publicly-listed firm Derriston Capital.

News of the venture first broke last night, but Sorrell had dismissed the reports as “market speculation”.

The new organisation will be renamed S4 Capital, with the intention of exploiting “significant opportunities” in technology, data and content, according to a statement to the market.

S4 Capital said it is already in “preliminary discussions” regarding potential acquisitions.

Sorrell, who becomes executive chairman of the London-listed company, has contributed £40m to the launch of S4 Capital, with a further £11m coming from institutional and other investors. The firm recently completed a £51m equity fund raise, and has received non-binding letters of support for more than £150m in further funds.

“S4 Capital is a company that aims to build a multinational communication services business focused on growth. There are significant opportunities for development in technology, data and content. I look forward to making this happen,” Sorrell said.

The method of launch — by seizing control of a publicly-listed firm and using it as a shell for acquisition — closely follows the approach used by Sorrell to acquire and develop WPP as an advertising holding company.

Sorrell has been allowed to launch S4 Capital as he did not have a non-compete clause in his contract at WPP.