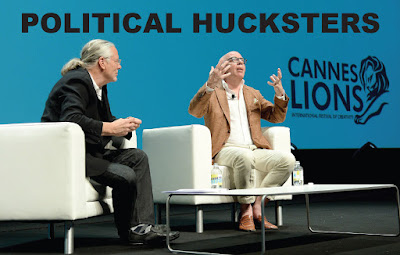 Quartz reported on a Cannes Lions Festival of Creativity event featuring Goodby Silverstein & Partners Co-Founder Jeff Goodby interviewing former Adweek Editorial Director Michael Wolff on his latest book, Fire and Fury: Inside the Trump White House. Who thought this discussion would be of relevance and importance to advertising enthusiasts? Sure, Wolff likely turned it into a pseudo-case study on PR, sales and social media. Yet the spectacle really showcased old-fashioned hucksterism, given Wolff’s first visit to Cannes in 2011 left him looking disinterested and out of place. Seven years later—and seven years removed from the advertising industry—Wolff is suddenly a celebrity at the industry’s premier awards gala. On the other hand, Goodby has already publicly displayed his disdain for President Donald Trump, so his participation in hyping Wolff’s book isn’t surprising. Although it is disturbing to see Goodby continue to share his political perspectives in a professional setting. Maybe Carl Warner was right after all in his contention that Madison Avenue presents a hostile work environment for allegedly underrepresented conservatives.