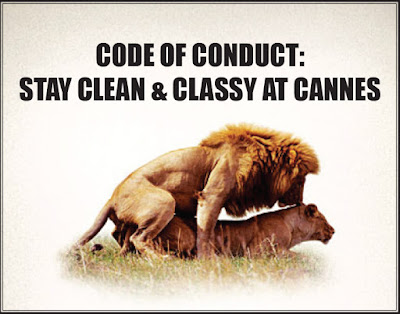 Adweek reported on the latest ravings from Divertsity Diva and pseudo-provocateur Cindy Gallop, who followed up her cuckoo contention that sexual harassment is the biggest business issue facing the industry by downgrading the problem to being the biggest business issue facing the Cannes Lions Festival of Creativity. Gallop announced she isn’t attending the annual soiree because “I can only afford to go when someone pays to fly me in and pays me to speak…” Gee, Gallop once insisted, “…Nobody anywhere is paying me anything to do the work I do in this area…” But less than two years later, she requires full travel and lodging accommodations, as well as a speaker’s fee. Hey, maybe she can piggyback onto Diet Madison Avenue’s GoFundMe donation drive to get a free ride to the French Riviera. Anyway, Gallop’s new brainstorm involves creating a “code of conduct” to curb bad behavior at Cannes. The last person in recent memory to be charged with drafting a code for adland was Shona Seifert, and it was part of her sentence for leading the White House anti-drug campaign scandal in 2005. In keeping with the tradition, Gallop, Kat Gordon or any other faux do-gooders should not be penning the crazy Cannes code. Rather, the task should be assigned to the perpetrators—e.g., Joe Alexander, Ted Royer and Duan Evans. Sir Martin Sorrell, Gustavo Martinez and Ralph Watson wouldn’t qualify for the job, as they haven’t been officially charged with wrongdoing.

Proposes a new ‘code of conduct’ for the festival

Gender equality and sexual harassment will inevitably be a major topic of debate at this year’s Cannes Lions Festival of Creativity, whether at official events or in the many conversations surrounding them throughout the week.

But one of the industry’s most visible advocates on that front will be notably absent from the beaches of southern France this year: entrepreneur, public speaker and former agency executive Cindy Gallop.

Several women who spoke to Adweek about the festival said they were surprised or disappointed to learn Gallop would not be there. But Gallop, who has been calling on women to submit their own #MeToo stories for the better part of a year, argued that advertising’s most public podium might not be the best place to discuss the subject.

When reached for comment on whether Cannes should play a more active role in the movement, Gallop took a different tack than some other gender-equality advocates. 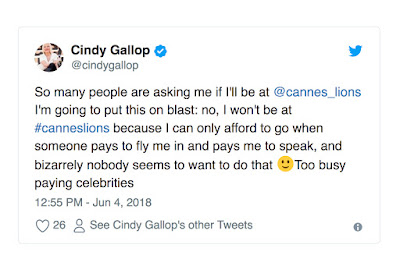 The solution, in Gallop’s mind, is a new code of conduct “that goes into every single registrant’s swag bag that you get handed when you register in the Palais, and that is pinned up at regular intervals on the walls of the Palais alongside the work” in addition to being mentioned by the leaders of every event, panel and celebratory dinner.

Gallop’s code, as she described it, would include calling on every man to watch out for improper behavior and “rescue women from situations that frequently involve an abuse of power that makes it particularly difficult for women to rescue themselves.”

She also stressed the need for a #MeToo hotline that doesn’t begin and end with a human resources representative but includes “counseling contacts and medical/rape center details where necessary.”

Ultimately, the code “should also include the fact that #MeToo whistleblowers are the true heroes of our industry, and that everyone exposing sexual harassers at Cannes will be celebrated for helping to remove the single biggest obstacle to true, gender-equal, diverse, effective, brilliant creativity in our industry,” Gallop wrote.

It’s a daring and perhaps unrealistic pitch, but some, like Wieden + Kennedy co-CCO Colleen DeCourcy, found it very appealing.

“We do need a neighborhood watch,” DeCourcy said in supporting Gallop’s call for signage. “[Cannes] is an easy place for people to get confused about what’s OK. It just needs to be said: We know it happens, and it’s not going to happen anymore.”

Or, as an internal memo sent to all IPG employees attending Cannes this year put it, “There can be a sense that this isn’t quite work or that we can behave differently, especially if alcohol is present.”

Spokespeople for Cannes Lions have not responded to a request for comment on the viability of Gallop’s suggestion.

Though the festival has avoided making formal changes to address harassment, next week may well bring some surprises. For example, an anonymous group of agency employees going by the #WomenCannes moniker plans to wear black and “roar” for female nominees in a protest similar to the one staged by Cannes Film Festival attendees last month.

Whatever happens, the entire industry will be watching closely.