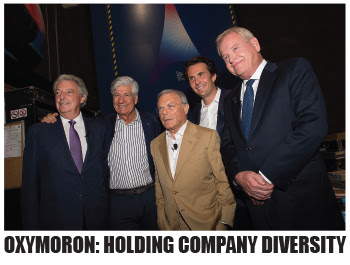 MediaPost reported on a study showing nearly a third of creative and media account reviews lead to consolidating the work at White advertising agencies and White media shops within the same holding company. Duh. Shuttling business from one White sister firm to another and awarding assignments sans a formal review are other holding company by-products that have ultimately commoditized the industry. As MultiCultClassics has repeatedly pointed out, in today’s adland, Goodby Silverstein & Partners is of equal value to Fathom Communications. There are no discernible differences between WPP, IPG, Omnicom, Publicis Groupe, etc. It could be argued that the holding company model has perpetuated exclusivity too. Simply view the photo above featuring current and former holding company honchos—and realize the former honchos were replaced by fresh White men. Hell, Sorrell was replaced by two White men. Even the alleged leaders are interchangeable clones. So it’s easy for clients to simply dump all of their business into any generic trash can holding company. 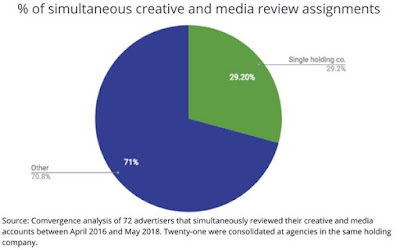 In what appears to be a first-of-its-kind study, advertising account review tracker Comvergence analyzed two years of reviews involving both creative and media assignments and found that nearly a third were consolidated at agencies in the same agency holding company.

The study, which examined reviews assigned between April 2016 and May 2018, found 72 involved both creative and media, and 21—or 29.2%—were awarded to agencies operating inside the same holding company.

Among holding companies, WPP and Interpublic were the two greatest beneficiaries, with seven and six marketers, respectively, consolidating both creative and media.

Publicis had four such consolidations, Omnicom had three and Dentsu and Havas each had one. 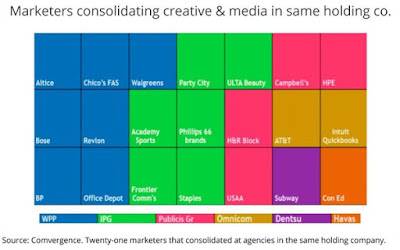 Know how else they do it? The holding companies invite a multicultural agency to come along with them for the pitch. The brand sees how oh-so-diverse the consolidated team effort is with their own eyes.

Then, once the deal is signed and the ink is dry, the multicultural agency gets relegated to the back of the line. Less than crumbs. They don't get to contribute to or create any of the big work.

That's how you get a holding company consolidating a few different agencies for a massive campaign, but the only people allowed to work on it in a significant way look like this: