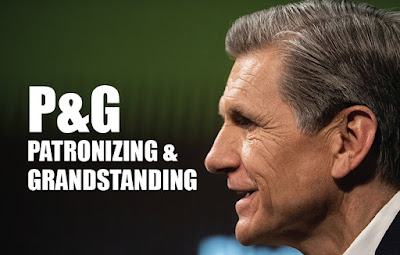 Adweek published a dungy divertsity dissertation from P&G Chief Brand Officer Marc Pritchard, calling on everyone to become creative change agents by jumping on the White women’s bandwagon. Sorry, but Pritchard is a stereotypical, culturally clueless client. And a political grandstander too, given his manifesto was unveiled during the Cannes Lions Festival of Creativity. The man knows that the underrepresentation of racial and ethnic minorities in adland is a far bigger problem than gender equality. Indeed, P&G requires its advertising agencies annually provide figures regarding diversity and the use of minority vendors—so Pritchard is absolutely aware of the dearth of true diversity in the field. Yet he chooses to conspire with other patronizing clients and White advertising agencies in focusing on the promotion of White women. Pritchard wrote:

Now, some may wonder, why are we still talking about gender equality? We have indeed been talking about it for years, but while it may feel like a lot is happening, the actual progress is frustratingly slow … even glacial.

Um, some may wonder, why has a global advertiser like P&G stopped talking about racial and ethnic equality (besides an occasional contrived commercial or Fill-In-The-Minority History Month print ad utilizing royalty-free stock imagery)? Why does Pritchard openly recommend quotas to boost White women, suggest 100% elimination of gender stereotypes in advertising and rally all professionals to join the cause? Where are such bold demands for people of color? Hell, P&G won’t even commit to increasing the crumbs allocated to minority advertising agencies.

For Pritchard and P&G, My Black is Beautiful—but the actual support for Blacks is downright ugly.

What if we all became agents of change by using creativity to accelerate gender equality? I want to challenge us to consider this question as we gather this week at the Cannes Lions Festival of Creativity.

Now, some may wonder, why are we still talking about gender equality? We have indeed been talking about it for years, but while it may feel like a lot is happening, the actual progress is frustratingly slow … even glacial. For example, the ANA #SeeHer movement recently studied 40,000 ads and media programs and found that 29 percent of women are still inaccurately or negatively portrayed through some form of objectification, stereotyping or diminished character.

And progress is slow despite evidence that business results are better when gender equality is reflected in creative work. Gender-equal ads perform 10 percent higher in trust and 26 percent higher in sales growth, according to the same ANA #SeeHer study. McKinsey estimates that closing the economic gender gap could add $28 trillion to the world’s economy—that’s a lot of purchasing power. And we’ve seen it ourselves, as some of P&G’s best performing brands have the most gender-equal campaigns: Always’ “Like a Girl,” SKII’s “Change Destiny,” Olay’s “Live Fearlessly,” as well as Tide, Ariel, Dawn and Swiffer which show men sharing the load in household chores. It’s clear that promoting gender equality is not only a force for good, it’s a force for growth.

Although good examples exist, we all know we’re not where we want to be yet. But I’m optimistic, because it feels like we’re getting close to a tipping point. We’re having different conversations about what’s right, what’s wrong, and what must change. So it’s time to come together to be agents of change, and push beyond the tipping point to achieve gender equality in the world of creativity.

Let’s get 100 percent of advertising and media accurately portraying women and girls. To help us get there, let’s aspire to achieve equal representation between women and men behind the camera in the creative pipeline—50/50 among CMOs, CCOs and commercial directors in five years.

Marketers and agencies have to join the moment. Join the ANA #SeeHer movement and the UN Women Unstereotype Alliance which aim to accurately portray women and girls, and eliminate stereotypes in advertising and media content—80 companies have already joined. We all compete on innovation and creativity, but we’re all united behind a common brief to be a force for gender equality.

We simply need more women commercial directors. Take the Free The Bid pledge and level the playing field so, over time, women are hired as directors for half of ads and creative content. Alma Har’el’s team has identified several hundred directors in nine countries, with more than 100 agencies and marketers involved. Over the next three years, P&G, HP Inc. and Publicis have invested to double FreeThe Bid’s number of directors and expand to 20 countries.

Madonna Badger is joining forces with Cannes Lions to curate a “Creative Showcase” at the #SheIsEqual Summit, co-hosted by Global Citizen and P&G during UN General Assembly Week in September. This will highlight and celebrate the best work from women creatives around the world and telling their backstories for inspiration.

What if we all became agents of change? We could move past the tipping point to an equal and better world with equal representation, equal roles, equal pay and equal respect. Society would be better, and business would be stronger. So please step up, be an agent of change and be a force for good—and a force for growth.

People at P&G and Free The Bid love to toss around the word diversity, but it's mostly centered on themselves.

I see them parroting all kinds of faux woke language that they picked up from Black Twitter, and retweeting black women who actually support their community, but real action? Nah.

Count the black businesses and non celeb/musician/athlete ad people they surround themselves with, and support and give business to, and then we can talk. Because empty talk isn't the same as real representation.