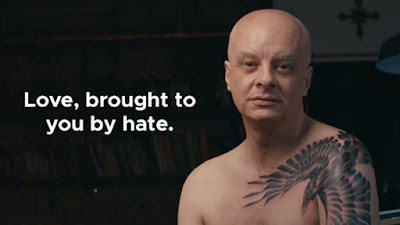 Adweek reported Grey New York partnered with anti-extremist group Small Steps to hatch a campaign countering White supremacist hate speech in the U.K. Why tap a White advertising agency in the U.S. to address racism in the U.K.? Surely Grey London is equally qualified to handle the subject matter. Hell, does Small Steps even realize White advertising agencies are rooted in White supremacy?

What is hate speech, exactly?

However one may feel about the tension between free speech and language as a weapon, there is little doubt that various forms of extremist behavior and the intentionally offensive content that comes with them have grown more visible online in recent years. Some point to social media as the primary culprit.

In order to combat that perception and help some individuals find their way back from the extremes, Facebook has partnered with ad agency Grey New York and Small Steps, an organization seeking to help counter far-right extremism in the U.K., for a new campaign.

The work centers on this profile of a now-former member of a white supremacist group. He is one of a group of Small Steps trainers and supporters who are covering their old racist tattoos.

The project also includes a series of Instagram videos in which graffiti artists explain—and proceed to cover up—symbols popular among white supremacist and neo-Nazi groups.

It’s part of a Facebook initiative called Create Against Hate, which brings disparate young creators together and “aims to eradicate and make a stance against hate, discrimination, and extremism on our platforms by establishing a movement within the creative industry and with partners like Small Steps,” according to a spokesperson for the social network.

“Having joined the Far Right as a teenager, I know young people in particular are at risk of being groomed into the movement,” said Small Steps founder Nigel Bromage. “That’s why we need to be talking to them directly: online, and in a way that they can relate to.”

This is not the only recent creative project to target extremism. Multicultural agency Alma recently worked with the ex-neo-Nazi behind Free Radicals on a campaign to help counter internet search queries that often facilitate extremist ideologies.