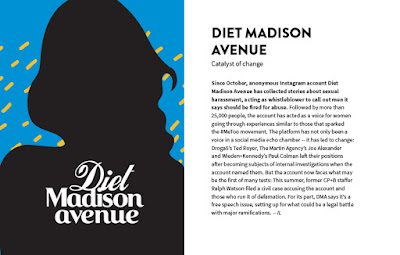 The 2018 Digiday Changemakers included Diet Madison Avenue, and the entry (depicted above) probably doesn’t help the anonymous Instagram account’s legal position in the defamation lawsuit it currently faces. That is, the DMA crew contends they publish third-party information as is; plus, they believe it’s a freedom of speech issue. Yet Digiday recognizes the DMA crew as whistleblowers, acknowledging their posts sparked terminations of alleged sexual harassers in the industry—and literally stating the anonymous Instagram account “has led to change.” There is legislation that protects whistleblowers. However, it’s unclear if the DMA crew would qualify, as their anonymity makes it impossible to identify them as employees of any advertising agency or company. Additionally, the DMA crew is essentially serving as third-party informants, relaying the charges of alleged victims. Can Diet Madison Avenue legally prove any of the posted allegations? Doubt it. In the end, the DMA crew is simply spreading rumors, gossip and hearsay. But hey, thanks to Digiday, Diet Madison Avenue now has one honor in its trophy case—and winning awards is undoubtedly a primary motivation of its creators.