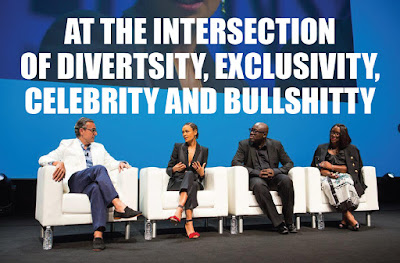 Advertising Age published a blurb on the HP- and Omnicom-sponsored Cannes Lions event titled: “Diversity—a Values Issue and Business Imperative—Requires Bold Action,” starring HP CMO Antonio Lucio, Omnicom SVP CDO Tiffany R. Warren, British Vogue Editor-in-Chief Edward Enninful and British Actress Thandie Newton. Can’t help but think this panel had an ADCOLOR® scent; that is, feature the usual suspects (Lucio and Warren) and sprinkle in celebrities to spike audience interest. When discussing the alleged progress being made in adland, Warren remarked, “I’m not happy. I’m content, but not happy.” It’s difficult to accurately comment on the happenings at Cannes without having attended, and the reporting has been uneven and likely uninformed. So this blog will forgo contemplating Warren’s contented unhappiness. But it is worth noting how Warren had earlier claimed her focus for the year would be on intersectionality. IPG SVP Chief Diversity and Inclusion Officer Heide Gardner also claimed her company started talking about intersectionality last year, and continued the conversation at the IPG annual breakfast this year. Um, are Warren and Gardner really qualified, willing and able to effectively present the topic—and is Cannes the best environment to host the discussion? If addressing intersectionality is truly imperative, then Halle Berry, Thandie Newton and Gloria Steinem should have been replaced with Kimberlé Crenshaw, Brittney Cooper and Latoya Peterson. Seems like the subject matter is too complex—and too important—for sound bites over breakfast. Sorry, but HP, Omnicom and IPG are too polite, political and patronizing to legitimately tackle intersectionality. Hell, they can’t even legitimately tackle diversity.

Diversity (to be continued)

The persistent lack of inclusion in advertising and marketing can make panels about diversity sometimes rueful or even painful, but the long line for Tuesday’s session on the subject at least demonstrated continued interest.

The actress Thandie Newton of “Westworld” and “Solo: A Star Wars Story” was clearly part of the draw, but the audience clapped enthusiastically for the other panelists as well, at their introduction and at points throughout: Edward Enninful, editor-in-chief at British Vogue; Tiffany R. Warren, senior VP and chief diversity officer at Omnicom Group; and HP Chief Marketing Officer Antonio Lucio, who has been pushing agencies to diversify their teams on HP’s account.

There is actual progress to celebrate, the panelists said. “I’ve seen 3 decades of change,” Newton said. “When I started out it was me, Halle Berry and Naomi Campbell who I would see often at casting calls. In the end it’s about demand.”

But Warren said she isn’t in any danger of succeeding her way out of a job. “I’m not happy,” she said. “I’m content, but not happy.”

Too often people rely on individuals to make change, Warren added. “Progress is made when every single person sort of stands up and says ‘I’m going to do my part.’”

“We’re all doing our best,” Enninful said, citing his project to depict a wide variety of people in his magazine, “but it will never be enough.”