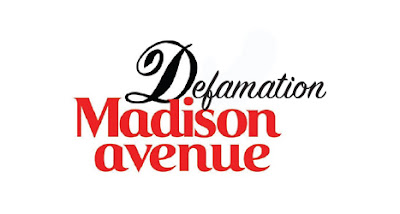 Campaign, Advertising Age and Adweek reported former CP+B CCO Ralph Watson filed a defamation lawsuit against Diet Madison Avenue and two anonymous individuals allegedly helping to run the Instagram account. Watson charges he lost his job because of false and accusatory DMA posts, and he’s seeking $10 million in damages. He intends to sue CP+B too. Within a day of the breaking news, Diet Madison Avenue went dark. The pathetic proceedings inspired a couple of cuckoo comments worth criticizing.

(To reiterate, MultiCultClassics had only made one visit to the anonymous Instagram account, so the following observations are mostly based on reports from trade journals.)

Responding to the lawsuit, the DMA crew stated, “Ultimately we believe [it’s] a freedom of speech issue. … We have not engaged in any criminal activities. We have published [third-party] information as is.” The secret pseudo-crusaders also remarked that if Instagram reveals their identities, “That will mean serious consequences for the millions who use Instagram’s platform.” Wow, the DMA crew is really stupid—and self-absorbed too. 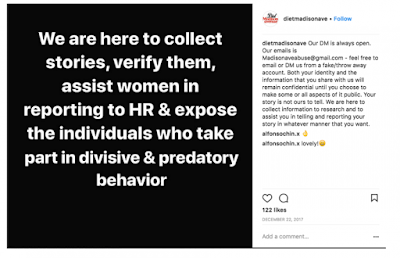 Does freedom of speech permit people to engage in defamation? That looks to be the position that Watson and his lawyer are taking, and it seems like a pretty sound legal course. While the DMA crew claims they “published [third-party] information as is,” didn’t they also label Watson as an “unrepentant serial predator” in posts? Plus, the DMA crew labeled themselves as an outfit dedicated to “Exposing sexual harassment & discrimination in ad agencies since Oct 2017, cuz HR won’t.” In short, the DMA crew has actively and openly injected editorial perspectives into the “information” provided by third parties in order to trigger action (i.e., employment termination). Hell, the mission statement implies that the DMA crew is deliberately attempting to punish alleged perpetrators. Oh, and despite anything they might insist or think, the DMA crew doesn’t know for certain if the “information” they published is true. In the end, Watson and his lawyer may have to show DMA and its accomplices-informants directly injured the ex-CCO. But does the First Amendment protect the DMA crew if they consciously participated in defamation? Doubt it. 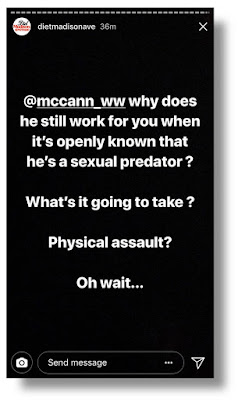 Additionally, the DMA crew viewing themselves as potential martyrs representing “the millions who use Instagram’s platform” is silly and sad.

Of course, The 3% Movement Founder Kat Gordon weighed in. “Societal changes take all different types of levers and pressure points—it takes all,” Gordon declared. “Whether or not you agree with what [Diet Madison Avenue] has done, this will be proof of whether what they’re doing is legally sound.” Gordon should just come out and admit she supports DMA. Not sure what Gordon meant with her “societal changes” statement. Is she condoning vigilante tactics? Yes, societal changes are activated in a variety of ways. But should we embrace the change agents promoting negativity and hate? Sorry, the DMA crew is not comprised of heroes and heroines—rather, they’re closer to being trolls. As well as mediocre writers and unoriginal thinkers.

To make a sloppy segue, Diet Madison Avenue symbolizes the key differences between fighting for divertsity versus fighting for diversity. If racial and ethnic minorities launched an anonymous Instagram account to expose everyone on Madison Avenue displaying conscious bias—or blatant racism—the reaction would be quite different. For starters, the number of followers would not exceed double digits, as true diversity doesn’t generate interest in adland. Second, the exclusive majority would roundly condemn the initiative and show universal, compassionate support for anyone accused of cultural cluelessness. Third, the account creators would be hunted down and expelled from the industry, furthering the underrepresentation of non-Whites in the field. In short, revolutionary schemes benefiting racial and ethnic minorities would never be tolerated. But when such maneuvers benefit White women, anything goes—and anything will be inevitably approved.

Ironically, if Watson succeeds in his legal battle and bags $10 million, it will underscore the prevalence of a gender pay gap in adland. After all, it’s highly unlikely that Erin Johnson collected as much in her settlement with JWT and WPP.