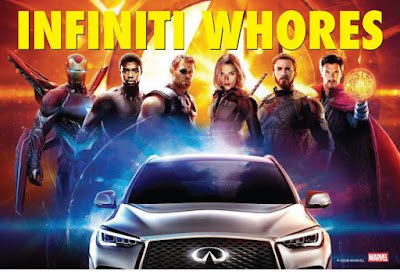 Infiniti is on the move again within MDC Partners. The automaker and 72andSunny have cut ties less than a year after the shop was hired to handle creative for several global vehicle launches. “We leave this relationship with best wishes for the success of the Infiniti brand. We are excited to be freed up for future opportunities in automotive,” 72andSunny CEO Matt Jarvis said in a statement.

72andSunny, which was hired last August, has been handling all global creative responsibilities, including big campaigns running in the U.S., such as one called “Thrones” for the new QX80. That meant less work for MDC sibling agency CPB, which has been working with Infiniti since 2014. But CPB will now be back in the pole position on the brand, according to people familiar with the matter.

CPB had remained on the roster even as 72andSunny handled global. CPB is behind [the] ad now running in the U.S. for Infiniti’s tie-in with Marvel for the new “Avengers: Infinity War” movie.

An Infiniti spokesman declined to share details on the global agency move, only saying that “Infiniti continues to use various agencies for our creative around the globe.”

One factor that could have worked in CPB’s favor is the installment late last year of Linus Karlsson as global chief creative officer. The Swede has auto experience from his time serving as creative chairman of Commonwealth McCann, overseeing Chevrolet, a role he held until March of last year.