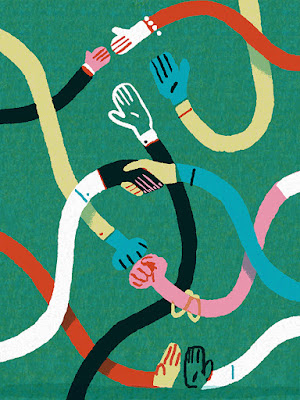 Adweek published a spirited call-to-action on diversity from Epsilon Executive Producer and Head of Production Jill Frank, who declared, “The Time to Prioritize Workplace Diversity and Inclusivity Is Now. Is Your Agency Ready?” Um, based on peeking at the Epsilon Leadership Team, Frank’s agency is definitely not ready. And why is the global marketing company delegating diversity to a production officer? With all due respect, an Executive Producer-Head of Production doesn’t typically influence hiring practices. Ironically, Epsilon boasts having “unrivaled data and expertise,” yet the White advertising agency is apparently not acting on the McKinsey data referenced by Frank—and likely ignoring their own personnel data that would show they are far from experiencing the “disruption through diversity” being proposed by Frank. While Frank deserves praise for taking a stand, Epsilon should walk the walk before letting her talk the talk.

The Time to Prioritize Workplace Diversity and Inclusivity Is Now. Is Your Agency Ready?

Foster an environment your employees feel comfortable in

Millennials are now the majority in the workforce, and we’re the most diverse group of workers yet. Those of us cuspers who entered the workforce with fax machines and primary landlines are now finding our leadership footing and speaking truth, encouraging diversity and building positive work environments. However, in advertising, we’re inheriting an antiquated agency model: an industry built on storytelling through and by the white male gaze. The white male gaze refers to a way of looking that empowers men and objectifies women, something all too familiar, from the overt days of Mad Men to today’s often subtle, nuanced and complicated landscape.

Disruption through diversity is the only way we’re going to shift the tides and bring about a positive sea change.

As trend and culture-setters, we have an opportunity to radically and immediately incite the conversation and not just partner with, but lead clients, ensuring inclusive, dynamic creative cultures and environments. But frankly, while any form of progress is positive, we’re not moving fast enough.

We have the proof points. A 2015 McKinsey study revealed that companies with more diverse workforces perform better financially. Your client might not prioritize diversity and inclusion, but you can bet driving sales is a top priority.

As education chair for my organization’s internal Diversity and Inclusion Council, I am helping to be a catalyst for change and champion diversity within my workplace and industry. Here’s what you can do.

Through advertising, we’re asking for consumers’ time, attention and ultimately, money, so at the very least we should make them laugh, ponder, cry—make them feel.

However, lack of diversity in creative translates into one of two outcomes:

Play it safe by trying to speak to everyone and end up speaking to no one. It’s easy to put out forgettable white noise. No feels, which is bad.

Add a little creative ego and general “un-wokeness,” and it’s even easier to put out memorable, horrifically offensive bullshit. See no further than Heineken. All the feels, which includes the bad ones, too.

We want people to pay attention to advertising, of course, but let’s also not offend or delay progress.

Look no further than P&G’s honest look at their past history of LGBTQ discrimination. The authenticity shown here is brave storytelling at its finest. There is a richness that comes with real-world experience, and that’s when you pull heartstrings in terms of brand connection.

The same can be said for the truth-telling work National Geographic did calling out their own troubled history with racism.

Fix your lack of diversity problem—today

Hire—and retain—women and people of color. Create a workforce that spans races, sexual orientations, religions and lifestyles. Not in five years, not in two years. Today.

We need a diverse workforce in writing rooms, in brainstorms, in pitches. Across all agency touchpoints, in all levels of leadership, across all departments.

And that’s not to say that women can’t sell beer or men can’t write for tampons. But from initial brainstorms to creative checkpoints to pitches, if you’ve got an all-anything team, you’re putting the work (and your client) at a disadvantage. The best case risk here is you’ll produce bland and irrelevant work. At worst, it’s falling somewhere on the offense-o-meter, rendering your client’s brand as tone deaf and your agency as unemployable. As the head of a production department, I think about this constantly, whether I’m hiring talent for my own team or casting actors. Are enough diverse people, opinions and backgrounds being represented? Leading with diversity in mind means keeping diversity top-of-mind.

If inclusion is the North Star, diversity is the Big Dipper. Fix your diversity problem, and it’s going to lead you straight toward creating an inclusive environment.

Diversity is the spark; inclusion is the enduring flame. An inclusive environment means your associates feel comfortable bringing their full selves to work.

A not new but still under-discussed concept is “covering,” which is hiding or downplaying a known stigmatized identity, the four axes of which are appearance-based, affiliation-based, advocacy-based and association-based.

Here’s an important point of distinction with covering: Everyone does it. The danger of covering in creative workplaces is that voices aren’t heard, stories aren’t told and the best work is not done.

Uncovered creatives are empowered creatives. Cultivating inclusive workplaces should perhaps be the number one priority for creative leadership.

Call me optimistic, but I think advertising is in the midst of a total sea change, if you’re in the right place. Advertising is not dead. It’s more alive than it’s ever been. What’s dead is the sea of sameness.

Jill Frank is executive producer and head of production at Epsilon Agency.