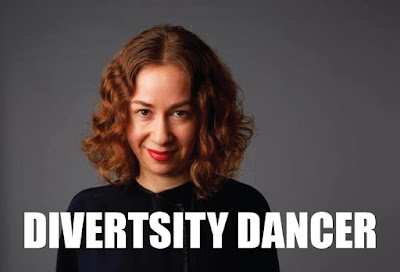 Campaign probed R/GA Chief Creative Officer Chloe Gottlieb on “equality, diversity and inclusion in adland,” which really means chatting up divertsity and the White women’s bandwagon. Gottlieb gushed, “I am proud to be part of the Time’s Up Advertising (TUA) charter…”—although it’s not clear if her pride bloomed before or after IPG encouraged its female executives to sign up. Additionally, Gottlieb discussed diversity, although mostly in regards to diversity of thought and gender. Why, she dreams that one day, panels celebrating diversity of thought will trump diversity panels. Um, somebody let Gottlieb know her dream is pretty much the current reality. As for R/GA, it’s great to see how the White digital agency has progressed to promoting pseudo-equality defenders versus exotic dancers.

Are we there yet? R/GA’s Chloe Gottlieb weighs in

Every week, we ask industry insiders across all job levels and titles to share personal stories about equality, diversity and inclusion in adland. We know we’re not there yet, but we want to document the highs and lows as the industry slowly transforms for the better.

Tell us about one thing that’s happened recently that leads you to believe there’s still a problem.

I am proud to be part of the Time’s Up Advertising (TUA) charter, organized by a group of senior women leaders from different agencies aligning around a common goal. As stated in our initial letter, following the TUA launch, we held several early listening sessions at R/GA where we discussed the issues we want to tackle as a company.

One of the biggest realizations that came from listening to feedback was the following: While we have made significant progress as women, there are voices that are missing in our evolving narrative. We recognize that we still have a ways to go to see all women represented in the senior ranks of our industry, and especially within creative leadership roles.

TUA will be holding public listening sessions in major cities across the U.S. on May 14. Please come and bring your different perspectives to the dialog. The more diverse we are as an industry, the more we reflect the real world, and the more creative we will be.

How about something that proves we’re making progress?

Last week, I spoke on a creative technology panel at D&AD that felt different than any other industry panel I’ve participated in. There were four panelists, all women. We discussed work that we’ve made, work that inspires us, and the technology innovation behind it.

It felt great to be on an all-female panel that was not focused on diversity. Our gender, race, and sexuality were not mentioned once. I hope to see more industry events like this one—panels that reflect a diversity of thought around inspiring work in lieu of diversity panels.

What else needs to be done to get there?

It’s time to stop viewing diversity as a “nice-to-have” and start viewing diversity as a business imperative and driver of creativity. By 2040, there will no longer be a clear racial majority in the U.S. Our job is to reflect the real world for our clients, but change is happening in culture faster than it is in our industry. We are facing an innovation gap where being exposed to diversity encourages new ways of thinking and leads to more innovative ideas.

According to a recent Harvard Business Review study, diverse companies are 45 percent more likely to increase their market share and diverse teams are shown to be 28 percent more innovative than homogenous ones. Companies that build diverse and inclusive cultures fastest will attract the best talent, generate the best ideas, and take the competitive lead.

One concrete way to get there faster is by recognizing the difference between mentorship and sponsorship. A mentor is an advisor who can offer helpful career advice and wisdom along someone’s career journey. A sponsor can turn someone’s potential into reality by getting someone involved in high profile assignments that have visibility throughout a company.

Men frequently ask me how they can be allies to women today. If you are in a role to hire, staff, and curate talent, you can be the sponsor who recognizes rising stars and helps them realize potential that might otherwise go unnoticed.