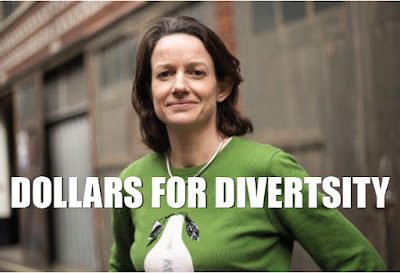 Campaign published divertsity demands from Now CEO Melissa Robertson, who presented forceful directives for collapsing the gender pay gap. It’s amazing how White women take bold stances on issues affecting White women, despite never coming close to displaying such revolutionary bravado for true diversity. For example, Robertson exhibited outrage at the “excuses” given for salary disparities between White men and White women, underscoring her displeasure by listing the top lies. Yet it’s a safe bet Robertson has quickly embraced the “excuses” routinely shat out to justify the underrepresentation of racial and ethnic minorities. Robertson backed mandating annual audits for all companies to clearly show income inequities. But would she approve annual audits to honestly reveal the industry’s lack of people of color? Why, Robertson was quick to publicize specific figures detailing how her company dramatically addressed the gender pay gap in a single year. Let’s see the inclusion numbers for non-Whites at Now—right now. Next, Robertson ordered special amenities and considerations for women in the field, including flexible work schedules, paid parental leave and returnships. Minorities, on the other hand, are expected to undergo additional training and assimilate to the White culture in order to gain access into adland. Robertson calls for “a complete cultural and behavioural overhaul” to ensure her paycheck matches her male peers’ paychecks. Okay, but the total reprogramming should start by confronting the dilemma of true diversity—a problem that has been ignored waaaaay longer than the gender pay gap. To be fair, Robertson is not unique among White women, and the intent of this post is not to single her out. Rather, the goal is to use Robertson as representative of a larger group and collective attitude covering both White men and White women. The road to true diversity requires simply applying the tips Robertson highlighted for the gender pay gap. After all, those tips were hijacked from the tactics of civil rights icons in the U.S. and U.K. In the end, White women—in concert with White men—will eventually close the gender pay gap. And minorities will pay the price by having to once again experience another deliberate delay of authentic equality.

A view from Melissa Robertson

When does doing the right thing become illegal? Tips on closing the gender pay gap

How should businesses even get started solving the gender pay gap? Now’s chief executive shares some advice.

For the last month, I’ve been slightly obsessed by all the gender pay gap chat, and notably all the ridiculous ‘excuses’ given to justify — sorry, ‘explain’ it. You know, things like women choose to work in low paid roles and sectors, women want to work fewer hours, women don’t really like technical jobs, women don’t want high paid jobs. Almost as if there is nothing that can be done about it. But of course we all know that isn’t true. The bigger question is how quickly?

According to YouGov, over 50% of people in the UK don’t believe the gender pay gap will ever close. The World Economic Forum is slightly more cup-half-full with a prediction of 217 years. But the introduction of mandatory annual auditing is a crucial first step to doing something about it. Currently this is only for companies with over 250 staff, which accounts for around 11,500 companies. Hopefully this will extend downwards, so that medium size businesses have to do it, and in time, everyone. I know this is a bit controversial, because in smaller companies, just one person of either gender can make a huge impact on the data. But it forces companies to think about it more consciously.

It’s not the first time I’ve banged the drum about this. We worked out our pay gap last year. We’re a company of around 50 people, with two female founders and a female managing director. Most people in the agency would say that this was a company where women have a powerful voice, which made the stark reality of the numbers surprising and hugely disappointing. We hadn’t quite computed the obvious discrepancy in, crudely, the number of men at the top and women at the bottom. In a year, we have dramatically changed our stats — from a median gap of 34.6% last year to 14.3% this year. We now have a female head of film and content, a female lead designer, and two female associate creative directors. Our transition has been actively managed around natural churn, but shows what can be achieved when you are determined and focused. We’re pleased at the progress, but not resting on our laurels just yet.

But… you can’t just ring up a headhunter and specify that you want a woman for a role. That’s been illegal since 1975. And here lies a potentially legal conundrum because I don’t think the 2010 Equalities Act is entirely cut and dry. In terms of corporate reputation, there will be an imperative to improve on gender pay gaps. And the Labour party has talked about imposing fines and sanctions on companies that show no improvement in their statistics. But there’s a real danger that the only way to truly deliver against expectations is to replace an unfortunate, but not-entirely-illegal-because-it’s-difficult-to-prove unconscious bias, with potentially-illegal-if-you’re-not-careful conscious bias.

Yet it’s so much more than that. What is really required is a complete cultural and behavioural overhaul. Book in some unconscious bias training and take a long hard look at your working and hiring practices. With this more positive and less illegal hat on, there are plenty of things you can do. You can insist on shortlists that always have at least one woman. You can make your business more attractive by improving your policies on flexible working and paid parental leave. You can change your attitudes (and pay) on the financial worth of certain roles that often have gender biases (HR vs Finance let’s say). You can appreciate the value of a returning mother (or father) — Creative Equals have an awesome programme of Creative Returnships, which agencies should be crying out for. From personal experience I was much better at my job after becoming a mother, because you have totally learnt how to focus and get shit done.

So, for all those businesses that haven’t yet dared to work out their pay gap, I urge you to do it. Do it urgently. Set it in motion today. Whatever your size. You will almost certainly be disappointed. But use that as impetus. Because it’s only when we confront our frailties that we then do something about them.

Melissa Robertson is the chief executive of Now.