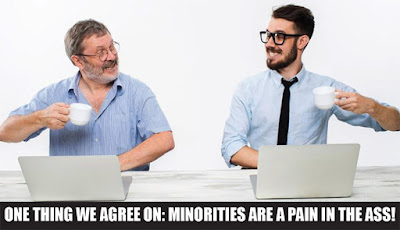 Campaign published a painfully lengthy report titled, “Too young to have an opinion, too old to innovate: lifting the lid on ageism in advertising”—with a subhead declaring, “Ageism is toxic both for the culture of the advertising industry and its creative output.”

Really? The truth is, “the culture of the advertising industry and its creative output” has thrived on ageism—along with sexism, heterosexism, disablism, cronyism, nepotism, classism and liberalism. Oh, and racism too.

The Campaign article spotlighted a Bloom event where elder statesmen and youthful newbies shared tales of bias, bad behaviors and burdens based on their birthdates.

One disturbing—albeit predictable—part of this discussion is the propensity to defend the alleged victims and denounce the alleged perpetrators. Indeed, the spirit of advocacy appears for every ism infesting adland. Why, [fill-in-the-ism] is a poisonous cancer that demands immediate and total elimination.

Except when it comes to racial and ethnic diversity.

For the BAME problem—which receives the attention typically directed towards a pesky itch—the victims are positioned as the perpetrators. There aren’t enough qualified candidates. It’s a socioeconomic issue, so we’ll need a few more decades to scour the inner cities for potential applicants. Those people are unaware of the opportunities in adland. Racial and ethnic minorities prefer to pursue careers as professional athletes and rappers. And the list goes on—with zero accountability pinned on the actual perpetrators.

It’s nothing new. And it’s really getting old.