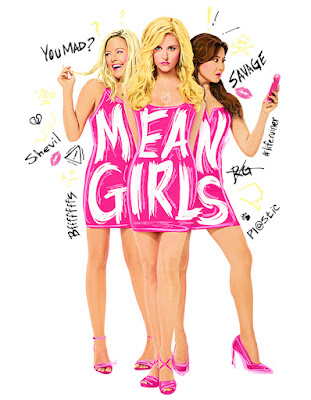 Advertising Age reported Time’s Up/Advertising fucked up its inaugural event. Seems the organizers turned it into an exclusive affair by initially rejecting the RSVPs of women who weren’t currently employed at a White advertising agency—which nixed freelancers and women between jobs. Technically, the action should have barred the self-promoting Cindy Gallop and Kat Gordon from attending the festivities. Time’s Up/Advertising quickly issued an apology and re-invited the rejectees, although the mess kinda confirmed contentions recently presented here.

Time’s Up/Advertising, the group founded by high-level industry executives to take tangible action against discrimination, found itself accused of just that as some industry women signing up for the group’s first big events today were turned down. The group has since opened up today’s community meetings, planned concurrently in 14 cities around the country, to include freelancers and others who are not current agency employees.

Time’s Up/Advertising, an initiative launched this year to address sexual harassment and systemic inequality in the workplace in partnership with Time’s Up found itself on the receiving end of complaints in recent days on social media by women who claimed their RSVP’s were declined. 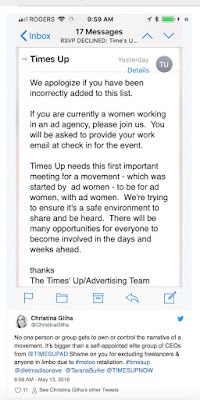 “Sisters, it seems we messed up. Thank you for getting that message to us. The last thing we want to do is exclude people who should be in the room,” the post said.

“The concerns we are seeing about missing the input of freelancers and people in the ad community who are in-between jobs are more than valid. Freelancers’ experiences in the agencies are often the very feedback we need because of circumstances that might have led to freelancing or finding themselves without a [full time] position in the agency. We also didn’t stop to see that often those of you most hurt by this problem are, sadly, no longer in our agencies. These are the kinds of blind spots we are aiming to fix. We are sorry. We want you to know that you will not be turned away at the door.”

The post added that many of its event venues will be at capacity, but did switch to a larger venue in New York — the Hammerstein Ballroom — and it invited freelancers or women between jobs to join the event. Time’s Up/Advertising wrote that the venue would be able to accommodate up to 2,200 women and would take in as many as fire code will allow.

The organization will also be livestreaming the first portion of its event in New York via Facebook Live. The 14 meetings around North America — and an online forum to reach beyond major cities — have the goal of facilitating face-to-face interactions with women in the industry to create solutions, identify and mentor people representing diversity and adopt progressive agency training and education, according to the group’s website.

Time’s Up/Advertising said it capped the original invite at “women who work in advertising agencies” because it wanted feedback on what wasn’t working at agencies, and because it sought a safe space (free of press, anti-women’s groups and — for the first meeting — men). The post called that decision an “imperfect solution.”

“We don’t expect you to trust us before we’ve even started,” the post continued. “Thankfully we are not alone and there are lots of you willing to put yourselves on the line to work on this together. The truth is, it helps us to hear the conversations that are happening in forums that aren’t our own. Tomorrow’s meetings will be made better by all of you who continue to use your voices to hold us accountable.”

Among those who initially had their RSVP rejected is Lucy Small, a creative technologist and president of the American Advertising Federation in Miami.

“It’s a shame that whoever is organizing these events has taken the title of this movement and has immediately chosen to indiscriminately and opaquely exclude formidable women in the advertising community,” she wrote in an email to Ad Age. “Botched events like this not only hurt the credibility of this movement in the advertising and creative space, but also the trust women have in organizations wanting to ‘support’ them.”