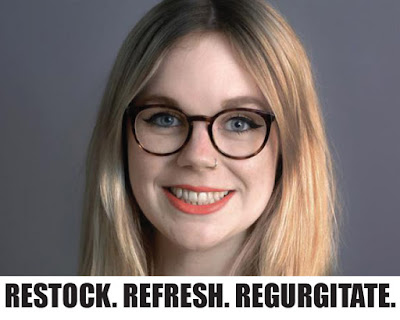 Campaign published divertsity daydreaming from PHD UK Media Group Manager Becci Dive, who opined, “We need to restock, and not just refresh, the agency talent pool.” Indeed, adland certainly doesn’t need more pierced, blonde Millennials. Or more White people like the ones comprising the exclusive leadership at PHD UK. Dive displayed ditzy dumbness by declaring, “2017 was a landmark year for the conversation around driving diversity in the workplace and archaic industry models being replaced—both by those in a position to change things now as well as the next generation of industry leaders.” No, 2017 was a landmark year for the conversation around driving divertsity—while deliberately deferring, delegating and denying true diversity. Plus, Dive demonstrated a lack of experience and awareness with her analysis of IPA diversity survey results, which she views through rose-colorblind glasses. Finally, she regurgitated the repetitive excuses involving minorities’ alleged ignorance of opportunities in the field. Forget restocking or refreshing. The industry talent pool requires rebooting. But will Dive rethink her rhetoric upon realizing the revolution may ultimately adversely affect her privileged status?

We need to restock, and not just refresh, the agency talent pool

A view from Becci Dive

Becci Dive, media group manager at PHD UK and named among Campaign’s Media Week 30 under 30 2017, shares her lessons from the ladder.

While we as agencies work hard to hone and refine how we identify and engage an increasingly diverse Britain to the benefit of our clients, there is ongoing conversation and challenge about how much we practice what we preach within the industry.

As Omnicom’s Talent Diversity Statement states, “agencies and specialist services should reflect the society in which we live,” but what does this really mean when put into practice and how attainable is this for us as an industry?

2017 was a landmark year for the conversation around driving diversity in the workplace and archaic industry models being replaced — both by those in a position to change things now as well as the next generation of industry leaders.

Results from the IPA’s 2017 Diversity Survey tell a similarly positive story of change, showing a positive trend in black, Asian and minority ethnic (BAME) representation in agencies, with employees from a BAME background growing to 12.9% from 12% in 2016, and more than doubling from 6.1% in the first IPA census. The most positive story is the growth in BAME representation in the junior echelons of agencies, increasing from 15% in 2016 to 16.4% in 2017.

However, while the data helps to illustrate an industry working towards change, diversity quotas alone are never going to solve the legacy of a “pale, male and stale” industry culture. The industry needs to go beyond merely opening the door and needs to take responsibility for letting broader segments of society know it is there and inviting them in.

Rory Beard, a head of department at a London Academy in South London, highlights that for many of the pupils in his school it isn’t simply socioeconomic factors that work against them. A lack of knowledge about the world outside of the area they live in further impedes development beyond their own expectations, or of those placed on them.

Restock, rather than refresh

A challenge we currently face is finding a way to not only access but engage and pique interest with talent outside of the graduate recruitment fairs and communities that are reached through existing relationships. A process that restocks, rather than refreshes the talent pool.

There is no doubt that efforts are already being made inside and outside agency walls to diversify the pool from which we recruit talent. Omnicom’s OMG OPEN, alongside broader industry initiatives such as #BAME20/20, Livity and Advertising Unlocked show the ambition, with the recent UK government levy on UK apprenticeships kick starting the formalisation of more industry centric schemes and opportunities being designed.

The IPA partnership with Creative Pioneers is in place to support the industry in both hitting the targets they have set and widen the pool of talent at our disposal to recruit. But this only works if we reach, engage and facilitate new people to join the industry – and continue to support them once they’re in.

So, the onus is on us to make these schemes are not only known about but viewed as desirable and attainable to school leavers who don’t see university as an option. Mirroring the latest published figures of a 27% decline in take-up of apprenticeships, adoption across existing industry options has been low, so it is our responsibility to engage new talent, provoke their interest in the sector and support their involvement and progression.

And therein lies a further challenge to this change.

While crucial plans and targets are being rolled out to try and rebalance the diversity of the industry and inspire alternative talent to join, are internal agency cultures open to an alternative approach, behaviour or way of working? So much of the skill required to thrive is behavioural, so how can people who don’t adhere to this, thrive?

At PHD, we have a two-week “incubation period” for new apprentices which is in place to lay out internal expectations, etiquette and bed them into the culture of the agency. But as Kirsten Oates, PHD UK’s head of people acknowledges, we need to be wary of a potential flip side of this good intention – that we tell new talent what to be and, in turn, limit diverse thought and behaviour?

I am so optimistic about the future, with so many committed to refreshing industry talent, culture and priorities, but I am conscious that the real change we need to inject could get lost in numbers on the surface. Yes, we may well hit targets, but what in our culture will have changed?