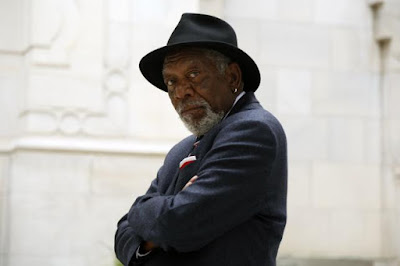 Advertising Age reported Translink, the Vancouver transit system, put the brakes on using Morgan Freeman as a voiceover for rider announcements after the iconic actor was hit with allegations of inappropriate workplace behavior. One odd sentence in the Ad Age story reads: “Freeman joins several others of his generation, including Charlie Rose, Kevin Spacey and Jeffrey Tambor, who have faced similar accusations.” Is sexual harassment now a generational issue?

Allegations of inappropriate behavior are already costing Morgan Freeman at least one business relationship. TransLink, the Vancouver transit system, said Thursday that it is pausing its collaboration with the actor, just one day after announcing that Freeman will voice rider announcements this summer.

Freeman’s TransLink announcements are part of an ad campaign with Visa Canada for its tap-to-pay offering.

“In light of information we’ve learned this morning of allegations regarding actor Morgan Freeman, TransLink has decided to pause his voice announcements as part of a Visa ad campaign on our transit system,” TransLink said in a statement, adding that it will discuss the matter further with Visa.

A Visa spokeswoman did not immediately comment on the company’s relationship with Freeman.

On Thursday morning, CNN reported allegations that Freeman engaged in inappropriate behavior, including making sexual comments about female employees and creating a toxic work environment at Revelations Entertainment, the company he runs with business partner Lori McCreary. Freeman joins several others of his generation, including Charlie Rose, Kevin Spacey and Jeffrey Tambor, who have faced similar accusations.

Freeman’s publicist did not respond to a request for comment.

Freeman’s well-recognized baritone is frequently heard in commercial voiceovers for brands including Visa. The actor also recently starred in a high-profile Super Bowl spot for Mtn Dew. He has served as the narrator for documentaries such as the Academy Award-winning “March of the Penguins” and hosts National Geographic’s “The Story of God.”

National Geographic did not respond to a request for comment.

Freeman’s Mtn Dew ad has not aired on TV since May 14, according to iSpot. A representative from PepsiCo, which owns the soda brand, confirmed that the talent rights for the ad expired.

Several spots in Visa’s “Everywhere you want to be” campaign that use Freeman’s voice, including “Party” and “Banana Boat,” are currently airing, according to iSpot. The actor is also voicing Visa’s FIFA World Cup campaign, which stars soccer star Zlatan Ibrahimovic.

Two years ago, Freeman provided the voiceover for an ad in Hillary Clinton’s presidential campaign. In the spot, he asks, “Our children are looking to us. What example will we set?”