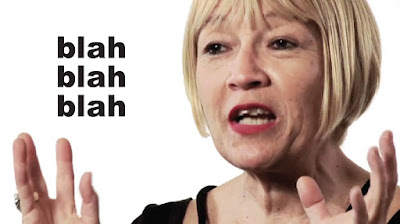 She adds that it would help if ad agencies and holding companies were more transparent about reasons behind their termination. Droga5 never explained Royer’s departure.

“That habit is entirely at odds with the other statements agencies and holding companies are prone to making about having ‘zero tolerance,’” she says. “We are hearing about zero tolerance from everyone, then tell us precisely what you have zero tolerance for.”

Clearly, Gallop doesn’t have zero tolerance for delivering confused and contradictory commentary. After all, Gallop has declared sexual harassment is the biggest business issue in our industry, as well as the biggest issue facing every industry and society today. Plus, she demanded holding companies eradicate non-disclosure agreements connected to sexual harassment cases. So why would Gallop suddenly want to avoid focusing on stories addressing the issue? Curious indeed.

Gallop also repeated another soapbox cause, calling on White advertising agencies to provide greater transparency around the reasons for firing people. Sorry, but it’s sometimes difficult to believe Gallop actually held senior-level positions in the industry. Personnel matters—especially those tied to terminations—are almost always private and confidential affairs, except in cases where crimes have occurred. To date, it doesn’t appear that any of the alleged sexual harassers in adland have faced criminal charges and arrest. While Gallop is correct to note Droga5 declined to explain the rationale for dumping Royer, Advertising Age reported Royer was among the executives targeted by Diet Madison Avenue; hence, like it or not, connecting the dots to reach certain conclusions is to be expected. BTW, has Gallop ever provided a personal stance on Diet Madison Avenue? Curiouser and curiouser.