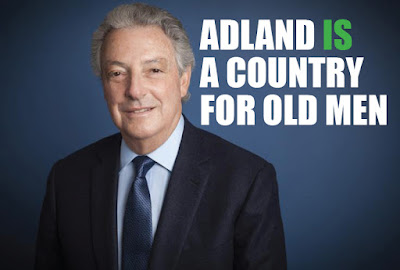 Campaign reported IPG Chairman and CEO Michael Roth shared his thoughts on potential successors with the IPG board of directors. Despite the contention that adland is unfriendly to seniors, the businesses are typically run by Old White Guys like Roth, Sir Martin Sorrell and John Wren (Arthur Sadoun is only 47 years old, but he had to wait for predecessor-dinosaur Maurice Lévy to exceed retirement age; and Yannick Bolloré is a mere 38 years old, but he won his role via nepotism). Plus, despite IPG’s boasts of being recognized for leadership in diversity and inclusion, the Campaign article identified Roth’s potential successors as two Old White Guys. Perfect.

Michael Roth talks to IPG board about potential CEO successors

By Lindsay Stein and Gideon Spanier

An industry executive with direct knowledge of the matter told Campaign that Michael Roth has offered his perspectives on a few potential successor candidates to the Interpublic Group board of directors.

Interpublic’s board has a guideline in place for the CEO to retire by the age of 75.

Multiple sources say Philippe Krakowsky, 56, the long-serving chief strategy and talent officer and the architect of July’s $2.3 billion acquisition of data business Acxiom deal, is the front-runner, although Harris Diamond, global chief executive and chairman of McCann Worldgroup, is also seen as a strong contender.

“It was notable when Interpublic made the Acxiom announcement that Philippe was on the call because most investors are unfamiliar with him and often companies are communicating something when they’re introducing executives to investors in a conference call or event like that,” said Pivotal Research Senior Analyst Brian Wieser.

“That doesn’t mean necessarily that these people are successors but it certainly sparks some speculation among people who watch these companies closely,” he added.

Wieser also told Campaign that if the Acxiom transaction goes well, then Krakowsky “could very well be the successor to Michael Roth.”

The Acxiom deal is expected to close by the end of 2018.

Diamond could be a good alternative to Krakowsky, according to an industry insider, who said: “The beauty of Harris Diamond is that he’s worked across disciplines and he’s running a huge piece of revenue globally.”

Wieser said Diamond is “perfectly capable” to run Interpublic but his current position as a business unit CEO is different — and more client-facing — than a holding company leader who deals with Wall Street.

Most groups would “want to think of someone 50s or younger” for the role, Wieser added, noting Diamond is over 60.

“If you know your industry and your company is going through a significant transformation, then you want someone to see it through and it could be a five or 10-year or even longer process,” added Wieser.

One industry insider expects that Interpublic will name Roth’s successor within this fiscal year.

But another source believes no boardroom change is imminent and, points out that, hypothetically, the company could extend the retirement age for Roth.

Wieser said “it wouldn’t be the worst thing for Roth to go out on a high note” after a decent first-half performance this year.

“He’s having fun and enjoying it,” added Wieser, “but this is a great time for him to step aside and be remembered favorably.”

The group is set to hold an annual strategy meeting with senior management in the autumn.

WPP’s recent appointment of Mark Read, 51 as the new CEO, succeeding Sir Martin Sorrell, and the promotion of Arthur Sadoun, 47, as CEO of Publicis Groupe last year has put attention on both IPG and Omnicom’s future plans.

Omnicom has already taken one step towards succession planning.

CEO John Wren added the title of chairman in April in what looks like a precursor to him relinquishing the role of chief executive. Wren, 66, has headed Omnicom for 21 years since 1997.

Despite speculation around Wren’s succession plans, a source close to Omnicom “vigorously” dismissed any suggestion that the CEO is planning his exit.