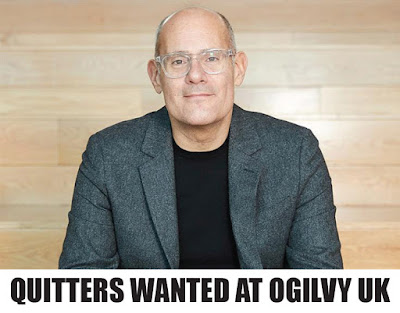 Campaign reported Ogilvy UK is offering everyone on staff voluntary redundancy. This is a polite way to tell employees, “We’ll pay you to quit.” If there are no volunteers, does the deal switch to severance agreements?

The company stresses that this is not a cost-savings move.

Ogilvy has offered all staff in its UK business voluntary redundancy.

The agency sent an email to staff today explaining the move. The business has had a significant restructure since the departure of previous chief executive Annette King. It is understood that Ogilvy wants to give employees, who may have joined before the changes, a chance to step away.

Ogilvy has made it clear to Campaign that this is not a cost-savings strategy but for the company to “reinvest for the future”.

King was replaced by Michael Frolich, who is overseeing the company’s move to an integrated model, dropping agency brands including Ogilvy & Mather and OgilvyOne.

John Cornwell, chief operations officer at Ogilvy UK, said: “This offer of voluntary redundancy is the final stage in Ogilvy UK’s transformation journey. Our intent is to be as transparent as possible and provide our people with choices as we continue to reshape our business for the future. The intent of these actions is to enable us to reinvest for the future.”