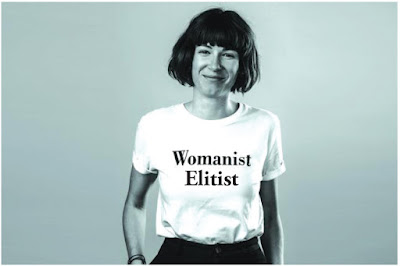 Advertising Age published an empty-headed Op-Ed from McCann Paris Art Director Lauren Haberfield, who unwittingly underscored how divertsity trumps diversity—and White women are totally unqualified to advocate for legitimate inclusion in adland. Haberfield opened her offensive perspective by typing, “It’s Advertising Week. Another opportunity to get together, collectively pat ourselves on the back and talk about how dedicated we are to fixing this whole ‘diversity issue.’” Of course, Haberfield is really focused on promoting herself and White women, as the sarcastic rant exclusively highlighted her Caucasian sisters, only making brief and insincere mentions of racial and ethnic minorities. Haberfield whined about the oh-so-torturous time that she and White women must wait for fair representation, completely oblivious to the fact that her progress waaaaay exceeds the baby steps—and moonwalking—endured by people of color. It’s more than a little ironic that Advertising Week served as a stage for investigating the industry’s dearth of diversity—back in 2006. Twelve years later, White women have seized the spotlight and kicked minorities to the curb. Haberfield sobbed about the alleged lack of lady leaders, totally ignorant to the reality that the entire U.S. advertising industry features fewer than 100 Black women in power positions. That averages to under two Black women per state. Haberfield took a couple of swipes at White men, failing to acknowledge that White women have been active co-conspirators in denying agency access to racial and ethnic minorities. Sorry, but White women in the advertising industry don’t deserve sympathy. Rather, they need to be held accountable for the exclusivity during Advertising Week—and the remaining 51 weeks in the year.

This Advertising Week, don’t pat yourself on the back for solving the diversity problem

It’s Advertising Week. Another opportunity to get together, collectively pat ourselves on the back and talk about how dedicated we are to fixing this whole “diversity issue.”

Thanks to a huge amount of effort from specially formed organizations (that we will all take credit for), progress has been made. According to the 3% Movement, 29 percent of creative directors in the U.S. today are now women. The industry has realized that representation matters, and many businesses are finally taking real action and committing to a more diverse workplace, not just adding a few token women to an agency’s creative leadership.

We’ve actively made an effort to promote women into leadership roles. We’ve leveled the playing field, and women finally have access to the opportunities and recognition they deserve. Problem solved! Now all we have to do as women is work hard and show everyone what we are made of, and we will all rise to the top … right?

Sadly, not even close. We may look up and see more women above us, but for any person who isn’t a cisgender white male, thriving in our industry has little to do with how good our work is or how talented we are. If I’ve learned anything during my time in this industry, it’s that every single creative woman, no matter her level, has to deal with a whole lot of completely unnecessary bullshit and, on top of that, make bad-ass, awe-inspiring work.

Earlier this year, I was one of 20 women from around the world identified as the next creative leaders in the industry as part of See It Be It, run by the Cannes Lions Festival. It was a life-changing week that included exclusive mentoring, training, networking and development. I left the festival bursting with motivation, game-changing ideas and genuine optimism convinced that, in the words of Oprah, “A new day is on the horizon!”

So how can we stop the endless talk about this issue and start to overcome it? For starters, we have to remember that diversity is not just about percentages and statistics; it’s about actively embracing the differences of others and opening up our minds to a new way of thinking. To paraphrase Olympic gold medalist, activist and all-round legend Abby Wambach, diversity is inviting minority groups to the table, inclusion is letting them speak.

We can keep inviting more and more women, people of color and of different ages to the table, but if we aren’t embracing the differences their points of view bring, why bother? To back up an empty statement that your CEO made about diversity at the last Advertising Week?

We all need to start taking responsibility for the inequalities in our industry. Calling yourself a feminist doesn’t count. Just because you’re not the person actively displaying sexist, ageist or racist behaviors does not mean you’re not accountable. You have to do something about it. Here are some ways to start:

Putting women in charge of a project? Mix it up. Make it something other than a beauty or femvertising campaign.

Asking women to talk on a panel? Let them talk about their creativity and not just about the fact that they’re women.

Organizing a team-bonding activity? Make it at lunch time so that moms (and dads) can get home to their kids.

Inclusion needs to be at the heart of every action, of every decision, every single day and it needs to start now. We are already losing the race. If we do not adapt, agencies, already threatened by consultants, tech giants and marketers going in-house, will no longer be invited to compete. We need to open up our minds and see that embracing difference is the only way to create something truly new that actually connects to the world we live in.

Take women in leadership positions: Throughout history, successful leaders have been portrayed as asserting masculine qualities—they need to be strong, dominating and sometimes bullying to earn respect. But how is a female creative leader meant to come up with authentic ideas when faced with this false “ideal” every day?

We need to embrace the feminine qualities that create great leaders and allow women and men to benefit from them. Leaders should be empathetic, transparent, able to connect with those around them and should not have to hide their emotions.

When women lead, companies thrive. It’s good business. And most importantly, it’s good for the work.

Imagine for a second that we actually “fixed” the gender disparity problem, and all the incredible, talented women on the sidelines of our industry could stop carefully tiptoeing around fragile egos, stop lying about their childcare needs, stop pretending to laugh at that joke-that-was-sexist-but-was-just-a-joke, stop trying not to appear intimidating and could just … focus on the work.

There would be a lot more bad-ass, awe-inspiring campaigns, and we would all be better off for it.

Lauren Haberfield is an art director at McCann Paris

Cindy Gallop, and various women are only concerned with increasing the # or % of white women in leadership positions.

Why do black people think that other groups will look out for their interests or struggle?