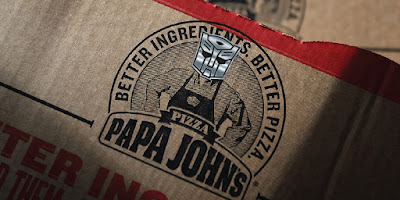 Adweek published a ponderous propaganda piece promoting Papa John’s titled, “Inside Papa John’s Transformation: How Diversity and Marketing Leaders Are Changing the Brand.” Um, it’s a little early to declare the brand has experienced a transformation, especially while ousted Founder John Schnatter is still in courtrooms conspiring for a comeback and confessing about NDAs. The pizza maker has allegedly embraced diversity and inclusion in its campaign and company, but has cultural competence ever turned around sales for any brand? Keep in mind that Papa John’s profits were dropping long before Schnatter dropped the N-word. Domino’s staged a revolution by improving its product. Papa John’s is praying for renewed earnings by spotlighting the underrepresented and partnering with a delivery app. According to Adweek, Endeavor CMO Bozoma Saint John stated “there would have been no way to have a productive conversation about the future of the brand without [Chief of Diversity, Equity and Inclusion Victoria Russell] in the room.” Great, now folks are delegating diversity and revenue rejuvenation to the people of color.

Inside Papa John’s Transformation: How Diversity and Marketing Leaders Are Changing the Brand

A new campaign and a focus on diversity and inclusion

Papa John’s is ready to embark on a new chapter—one without former founder John Schnatter, who was publicly ousted from the brand (and all of Papa John’s marketing) following his use of the N-word and other racially insensitive comments on a conference call back in May. Since then Papa John’s has moved quickly to show the world that the brand is not defined by one man’s actions—from rolling out a new marketing campaign without Schnatter to making plans to drop the apostrophe from the company’s name and branding.

Adweek caught up with the brand’s chief of diversity, equity and inclusion, Victoria Russell, at the inaugural Brandweek event in Palm Springs, Calif. Papa John’s was a hot topic at the event, as Brandweek keynote speaker and Endeavor CMO Bozoma Saint John gave a shoutout to Russell during her session, saying there would have been no way to have a productive conversation about the future of the brand without Russell in the room. Endeavor Global Marketing took on the role of agency of record for Papa John’s in early August.

In the week following Brandweek, Adweek spoke with three leaders from the brand, including Russell, to understand what went on internally following Schnatter’s comments and how the brand will—hopefully—bounce back.

“Ultimately, when a brand has an experience like ours has, there’s a real desire to put a stake in the ground for who we are. Who we are as people and who we are as a brand and what we believe in,” explained Melissa Richards-Person, vp of global brand strategy for Papa John’s. “This is a brand of the many and for the many. Not of one.”

That manifested with the rollout of the brand’s “Voices” campaign in mid-September. Papa John’s agency, Endeavor Global Marketing, presented the idea of focusing on the real people behind the brand as a stark contrast to previous campaigns that put former founder Schnatter at the center of everything. “Voices” would focus on pizza makers, delivery drivers and store managers, instead of the infamous Schnatter.

Papa John’s and team took advantage of the fact that it had nearly 2,000 of its franchisees, franchise owners and managers from across the country at its annual operations conference a few weeks prior to the campaign’s release. The brand worked with Endeavor to interview nearly 70 people at that conference about what they love about the brand.

There was no script given to those 70 or so people, although a few lines were scripted here and there. “What was so much more effective and honestly makes up the bulk of the spot, is the natural and authentic reactions that people had when we were just interviewing them,” Richards-Person added. Papa John’s says so far the campaign has been a success and plans to use more of these stories in the future to continue to rebuild the brand’s image.

“We aren’t naïve. We don’t believe that you air one message like this and everything is all of a sudden better. What we are encouraged by though is that people are recognizing that we are making the effort,” Richards-Person added. “If this at least gets people to open up a dialogue with Papa John’s and to give us another look, see what we are doing and see the actions behind the stake in the ground that this represents for the brand, then for us that’s a huge success.”

The campaign also gave those closely associated with the brand a voice following the media frenzy around Schnatter. It helps humanize the brand and the people behind it.

Russell noted in the days and weeks following news reports of Schnatter’s comments that the mood in the office was visibly bleak. “A lot of people struggled with representing the brand outside of the building, what that felt like, what it felt like to wear the logo at that point and defend the brand,” she said.

Russell herself, who has worked for Papa John’s for 12 years, even considered walking away from it for a brief period of time. “The company I had grown to know in 12 years was not representative in the remarks that were made,” she said. Russell soon realized that one man’s actions didn’t reflect the entire organization.

Prior to the comments being made, Russell had been hard at work making sure that Papa John’s thought about diversity and inclusion every single day. A few months before all of this unfolded, Russell started a diversity and inclusion committee—a committee of roughly 30 team members that met repeatedly after the comments became public to discuss how everyone was feeling, a place to air their grievances. But not for long.

“At some point, instead of just continuing to complain about the way things are, we had to think about what the path forward looks like and how can we all be part of that?” Russell added. Some of that will show up in more diversity and inclusion training, unconscious bias training for all team members and an increased focus on recruiting and retention within the company and so on.

“It’s important to know that this is not a reaction to what happened. This is not a PR stunt, this has been a long-term objective for the company and it’s going to take a while for some of it to get set up but we are trying to get some rolling here in the short term,” she added.

So what else comes next for the brand?

For one, Papa John’s has plans to make a major (but also minor) change to its logo. In August, the brand filed a trademark that would drop the apostrophe from the brand name, turning Papa John’s into Papa Johns. While it seems evident that this is a move to make people forget about John Schnatter and his ties to the company, the brand suggests it’s more than that.

The potential new logo design is a bit more contemporary and helps move the brand into the future, according to Richards-Person. While Papa John’s has filed this trademark, the brand does not currently have any plans to incorporate the new imagery into its marketing just yet.

“It was important for us that this truly demonstrated that we are changing as a brand but that the things people love about us, like better ingredients, better pizza, are still at the core of what we do,” Richards-Person said.

Some of the change for the brand will also come in how it thinks about the customer experience, technology and innovation. Anne Fischer, vp of product innovation at Papa John’s, noted that the company recently invested in ordering a new API to bulk up the brand’s delivery business and unlock new channels for people to order pizza, since 65 percent of all orders come through digital channels (and 70 percent of those orders are on mobile). The brand also just announced a major partnership with technology company DoorDash, so consumers can order pizzas through the DoorDash app.

“It’s a very customer-centric strategy so we are taking our cue from them and planning accordingly, but through these investments in technology we are able to move at a much faster pace,” Fischer said.

At the end of the day, a lot of the brand’s success may be determined by its leadership and the company’s ability to convince people to give Papa John’s another chance.

Added Russell: “Yes we’ve faced some challenges and adversity, but through that we could have an amazing turnaround story for this brand and our team members, because as long as we put our people first, our customers first, our suppliers, our franchisees, we will embrace the global nature of inclusion.”