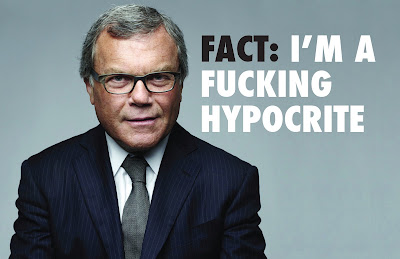 Advertising Age reported WPP Overlord Sir Martin Sorrell is a hypocritical, lying jackass. During a video interview at the 4As Transformation Conference, Sorrell admitted “there is a problem” with diverted diversity and real diversity in the advertising industry. Additionally, he “violently” disagreed with his equally culturally clueless peer—Publicis Groupe Grande Dunce Maurice Lévy—who believes the Gustavo Martinez debacle is a “one-time mistake” and not indicative of a widespread problem in adland. “Maurice has a habit of ignoring the facts and not letting the facts interfere with his analysis,” said Sorrell. In contrast to Lévy, Sorrell acknowledged White women are underrepresented in leadership roles; plus, he recognized the representation of Blacks, Latinos and the LGBT community is “unacceptably low.” Now, what makes Sorrell’s analysis so remarkably obscene—besides the facts that Martinez and Neil French were employed by WPP—is the fact that WPP recently proclaimed itself to be “perhaps the most diverse example of diversity of any single organisation.” Sorry, but WPP is perhaps the most blatant example of exclusivity and discrimination of any single White holding company. And Sorrell is perhaps the most annoying example of hypocrisy, dishonesty and cultural cluelessness in the advertising industry.

Martin Sorrell to 4A’s Gathering: ‘There Is a Problem’ With Gender, Diversity

Women Make Up Half of WPP’s Staff, but Only 33% Account for Senior-Level Talent

One week after J. Walter Thompson’s former CEO Gustavo Martinez resigned for alleged sexist and racist remarks, WPP CEO Martin Sorrell said “there is a problem” in the industry regarding gender and diversity issues at the 4A’s Transformation conference.

Mr. Sorrell said he disagrees “violently” with Publicis Groupe CEO Maurice Levy, who told the audience on Tuesday that the Mr. Martinez situation is a “one man mistake.”

Discussing gender in advertising, Mr. Sorrell said that across the 190,000 staffers at WPP, 50% are women, and when looking at the junior and mid-management level talent, the number is about the same. However, he said the senior-level number for women at the holding company drops to 33%, and the same is true across other diverse groups, such as Hispanics, African-Americans and the LGBT community, which is “unacceptably low.”

WPP, he said, has programs in place to try to improve this through training programs.

At one point Mr. Auletta noted that “WPP took several different positions as this unfolded in the press,” but Mr. Sorrell pushed back saying the company responded appropriately at each time to the information it had.

While Mr. Sorrell said there’s a “limited amount” he can say regarding the Mr. Martinez and WPP lawsuit filed by JWT communications chief Erin Johnson, he made it clear that the former CEO’s resignation was a “mutual” decision.

“Whether you believe that Gustavo is innocent or guilty—which is yet to be determined in a court of law—in the court of public opinion, he has been sentenced and judged and found guilty,” said Mr. Sorrell. “He thought and I thought and we thought it was in the interest of the company for him to resign and be replaced by Tamara Ingram as CEO.”

He added that WPP did not insist that Ms. Johnson take a leave of absence, and “it’s up to her if she wants to come back to the company or not.”

Discussing another hot topic—the ANA-4A’s feud around rebates and transparency—Mr. Sorrell said, “Rebates do not exist in the U.S.”

“We’re quite willing to talk to any client that has any concerns with arrangements at any agency,” he added. “If they have any concerns, they should take that up with us.

Mr. Sorrell also said that the likes of Facebook and Google are “not technology companies – they’re masquerading as technology companies, but they’re new media owners.” And, he added, “the degree of transparency there is even less.” Even though he may refer to these tech giants as “frenemies,” WPP still has major deals with them, with $4 billion going into Google and $1 billion in Facebook out of its $73 billion media book. “There are frenemy relationships in most industries,” he said.

“And on JWT’s site, of more than 150 employees listed under its “People” section, less than a third are women — and just one person is Black.”

Tell me how their parent company WPP is an example of (quote) “perhaps the most diverse example of diversity of any single organisation” again?