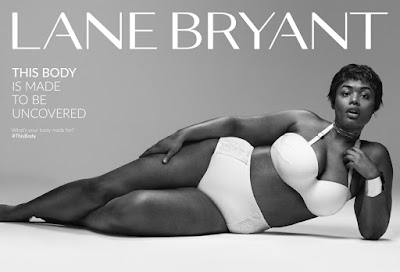 Advertising Age published an interview with Lane Bryant CMO Brian Beitler on the new “This Body” campaign featuring plus-size models. The discussion spotlighted the notions of diversity and inclusion in relation to beauty standards. Oddly enough, the advertising agency behind the campaign—Laird + Partners—specializes in fashion, luxury and lifestyle. In short, the place is responsible for perpetuating a lot of the traditional beauty standards that Lane Bryant is seeking to shatter. Or perhaps expand is the more appropriate term.

Earlier this week, TV ads for a new campaign from plus-size retailer Lane Bryant were reportedly rejected for raciness by networks including ABC and NBC. ABC has not publicly commented, while NBC told the New York Daily News it had asked for minor edits. Unveiled last month, the campaign “This Body” from agency-of-record Laird & Partners pushes inclusivity by featuring plus-size models such as Ashley Graham and Precious Lee. It also included the 700-unit chain’s first Sports Illustrated ad. Chief Marketing Officer Brian Beitler lays out his strategy for dealing with marketing challenges, and keeping the 112-year-old brand part of a conversation that increasingly includes more diverse body types—Barbie recently unveiled a new range of dolls, while Target has a new plus-size collection, for example.

Ad Age: How does “This Body” continue the evolution of previous campaigns #ImNoAngel and #PlusIsEqual?

Mr. Beitler: The first campaign was about finding a way to show that everything defined as beautiful wasn’t true beauty. As we moved into fall, we said there was an anthem that needed to be made for the industry to change, for all women of all body types to be seen and represented equally. Now, “This Body” plays the role of getting to the type of dialogue we want to have as a brand. Our bodies don’t constrain what we can do and anybody can have an impact on their world. The partnership with Sports Illustrated shows that “This Body” belongs in an iconic, image-focused magazine just like any others. Our hope here is that this is a platform for women to articulate how and what they use their bodies for. It’s to allow women to express themselves without boundaries.

Ad Age: What has the reaction been thus far? Have you seen any sales uptick?

Mr. Beitler: The reaction continues to be very positive. We’re getting phone calls from women shopping our brand and those who don’t, who believe the message is right even if they are a size 4 or 6. We just posted, as a public company, our fifth quarter of consecutive positive comps in a tough retail environment. Not only is the message being heard, but it’s resulting in new customers coming to the brand and existing customer spending more.

Ad Age: Do you have a comment on the recent decision by ABC and NBC to not broadcast your new ad? Will you be editing it, as requested by NBC?

Mr. Beitler: We created this commercial with an intent to air and felt there was nothing objectionable in it. Our plan is to keep the edit “as is,” we believe it’s a beautiful and appropriate expression of women’s bodies. We do plan to air this through our own media channels as well as through digital channels.

Ad Age: How do you think the cultural conversation has shifted regarding body diversity?

Mr. Beitler: We are seeing a much greater degree of acceptance and inclusion. Progress has been made and we’ve seen an evolution with inclusion of women of all shapes and sizes in media and fashion. We’ve seen them walk the fashion runway, we’ve seen Barbie change the way that Barbie is defined. Brands are starting to wake up and to listen. There’s a huge financial opportunity in this—this is a category of women who have been largely ignored by publications and she has money to spend and an appetite for fashion. There’s growth for us and others.

Ad Age: With so much of the conversation on diverse body types and plus size getting more play with fashion houses and brands, how can Lane Bryant remain relevant?

Mr. Beitler: We’ll continue to lead and push the dialogue and hopefully receive some credit from both the consumer base and media base for being willing and able to do that, as a brand in business for special sizes for over 100 years. Sure you might worry as others enter the space, but the reality is we feel strongly that we know this customer better than anybody.

Ad Age: What are some of the challenges you faced in developing the new campaign?

Mr. Beitler: The biggest challenge of finding any idea is trying to find an idea broadly inclusive and embraced by all women young and old. The more relevant you are to consumers and women in general the more desirable the brand will be. We don’t look at the issue around body as being a feminist issue or women’s issue, we look at it as a human issue.