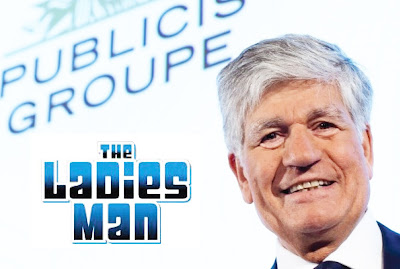 Advertising Age reported Publicis Groupe Chairman and CEO Maurice Lévy is backpedaling as a result of the backlash bombarding him for his ignorant comment on former JWT Worldwide Chairman and CEO Gustavo Martinez. Technically, Lévy is standing by his contention that Martinez presented an isolated incident versus represented the industry in general. The moron went on to boast about all the White women thriving in Publicis Groupe, and he even made a nod to the LGBT community. However, he failed to acknowledge any progress with racial and ethnic diversity. Lévy is probably too busy reviewing the White male candidates vying to succeed him once he finally retires.

But Mr. Martinez wasn’t the only subject of criticism in light of the suit. Publicis CEO Maurice Levy also caught his share of backlash for the way he responded to the news coming out of rival WPP in an interview following his conference keynote. “I don’t believe what happened at JWT is an example of what’s happening in our industry,” Mr. Levy said during the Q&A with New York Times media columnist Jim Rutenberg. “It’s a one-time mistake, a huge mistake, a huge fault. But it’s not a fair representation of the industry.”

Among those criticizing Mr. Levy’s statement was WPP CEO and rival Martin Sorrell.

Mr. Sorrell said he disagreed “violently” with Publicis Groupe CEO Maurice Levy, who told the audience that the Mr. Martinez situation is a “one-man mistake.”

“Maurice has a habit of ignoring the facts and not letting the facts interfere with his analysis,” said Mr. Sorrell, who was being interviewed at the 4A’s by The New Yorker’s Ken Auletta.

Now Mr. Levy responding to criticism, clarifying his position in a staff memo that was also made available on the Publicis website.

Here’s his message he sent to employees:

Last week’s talks at the 4A’s Transformation 2016 conference in Miami and the larger discussion that has since developed on social media and in the press, have, without question, called for a clarification of my own.

When I replied to Jim Rutenberg’s question, I focused on the JWT problem, a WPP agency, and the allegedly racist, anti-Semitic, and sexist comments made by its CEO, such as they were reported in the complaint filed by Erin Johnson (case 1:16-cv-01805 filed on 10 March 2016 at the United States District Court for the Southern District of New York: I encourage you to read the complaint, it is appalling). I condemned them very strongly. I must say that his comments, if true, are jaw dropping. To such an extent, that in my opinion, they can only represent the unforgivable fault of one man, as opposed to an industry-wide evil. On this point, I maintain my position, and I dare hope that I am right—I can’t for one second imagine that it is common in our industry (or in any other) to make jokes at every turn about women, blacks and Jews, and to speak of a subject as sensitive as rape, as it was depicted in Erin Johnson’s complaint. Should a case of this nature be brought to our attention in our own Groupe, we would react strongly and without delay.

I am not wide-eyed, and I am well aware that striking the deserved balance is still some distance away. We know there is a lot of work left to be done, across the industry, with regards to compensation, mobility, promotions, leadership and hiring.

On gender equality and diversity, Publicis, its founder and myself, are a part of those who have always been on the forefront of the fight for equal treatment, hence our mantra “Viva La Difference”. I recalled that the first female CEO ever within our industry was appointed by Marcel Bleustein-Blanchet, founder of Publicis, in 1938. This may seem anecdotal, but it is far from being so—eleven years before the landmark book The Second Sex by Simone de Beauvoir was published. Our Supervisory Board is equally made up of women and men and is chaired by a woman, an intellectual, whose written and spoken statements on feminism go without mention. We have 38% women in executive positions—even if I know we must go the extra mile so that this number is higher, especially for top positions. Hence my pride that our largest agencies are managed by women. Our commitment on this front is strong, and we hope to be even more exemplary, working hard to achieve this goal. Thus, our support of initiatives that engage and celebrate women and diversity in all its forms within the Groupe, notably Viva Women and Égalité (Equality, an LGBT movement). Thus, our financial support of the Women’s Forum that promotes gender equality and tackles societal challenges from a women’s perspective. We are not perfect, far from it, but we are determined to take further action for as long as necessary.

As far as Martin Sorrell’s comments, I must say that he once again showed his extraordinary level of hypocrisy. I mean, really? The situation began in his company, in one of his largest agencies, with a CEO, therefore someone who is meant to lead by example. His colleague did everything possible to have her story be heard, without it being so, even from the very person who should listen—the Chief Talent Officer. A situation that has been going on for over a year, and his response as CEO of the largest advertising company globally was nothing but a dilatory tactic, attacking ad hominem one of his colleagues during a flagship industry event, while my name was neither mentioned or implied in the question.

We could have expected more dignity from him, especially during my interview. I refrained from damning WPP, whose reaction in this affair is all but glorious. I know that we don’t have the same values, no matter the light we shed on our behaviors. Our actions are living witnesses to our values, whether in business, family or moral matters, or in regard to compensation. Rarely will Martin Sorrell have so well deserved the description given to him by so well by David Ogilvy.

Facts truly are stubborn things. For Publicis Groupe, gender equality and diversity across the industry have mattered for decades and we will continue to pursue them restlessly. Our values are strong and generous—leaving no room for such behaviors that tarnish our industry.

The David Ogilvy description for Mr. Sorrell that Mr. Levy linked to was “odious little jerk.”

In a response Tuesday evening, a WPP spokesman gave no ground. “From what we’ve seen and heard his comments, which were publicly reprimanded immediately by Nancy Hill, head of the 4As, stirred up a hornets’ nest, which Levy is now attempting to deal with,” the spokesman said in an email. “Levy is clearly attempting damage limitation for ill-judged remarks at the 4As Conference. We are glad to hear he is attempting to reverse his original position. After all, a foolish consistency is the hobgoblin of little minds.”

In related news, it looks like they found their house negro.

"Other affidavits filed include one from Keni Thacker, senior event technology specialist. He filmed the video in question and said in the document that he is executive producer of Differenter, JWT's diversity and inclusion program. "I have read the complaint and some of the press coverage of same, which characterize the comments that Gustavo Martinez made at the meeting as racist," he said in the document. "I am African-American and I took responsibility as executive producer of Differenter because diversity is an issue I feel passionate about. The comments Gustavo made during the meeting had nothing to do with race and I did not feel at the time of the meeting or now that there was anything racist about them."

So he's, like, the tech guy who plugs stuff in and makes sure the camcorder is on?

He can call himself an Executive Producer all he wants, but he's still just the guy pushing the little red button in corporate boardrooms and conferences.

He's also not the client or the brand attached to this CEO buffoon, who DO have to worry about how this affects their bottom line. His words have to be taken with the grain of salt of someone who doesn't have any power, and will still (when the dust settles) find his job quietly swept away.