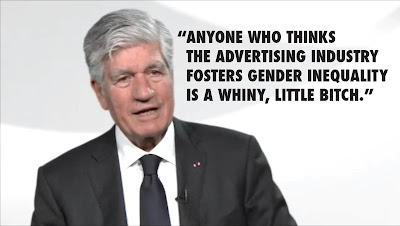 Advertising Age reported Publicis Groupe Chairman and CEO Maurice Lévy is an ignorant douchébag. Commenting on the Gustavo Martinez mess, Lévy remarked, “I don’t believe what happened at JWT is an example of what’s happening in our industry. It’s a one-time mistake, a huge mistake, a huge fault. But it’s not a fair representation of the industry.” Well, it depends on how you view the Martinez scenario. That is, it’s wrong to believe the average Mad Man is a sexist, misogynistic buffoon—mostly because the majority of White men in the field are increasingly supportive of White women and diverted diversity. However, it’s right to believe the average Mad Man is a culturally clueless moron perpetuating the discriminatory exclusivity in the field (although the average Mad Man may not be as blatantly racist as Martinez appears to be). Martinez’s cultural cluelessness—as well as Lévy’s ignorance—definitely and fairly represents the industry in general.