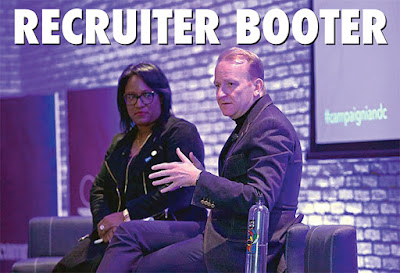 Campaign reported PepsiCo Global Beverage Group President Brad Jakeman boasted of firing a recruiter who failed to identify enough White female candidates for an executive job search. Jakeman warned, “Unless you follow through, I’m sorry, you’re out.” Wonder how many Black candidates were presented for the role. Of course, Jakeman would never be so bold as to make such demands of the White advertising agencies he employs, where diversity is a dream deferred, diverted and denied. He opts to take the easier path by dumping a recruiter, which is roughly the equivalent of replacing a bad barber.

Cultivating a diverse workforce isn’t just a social good, it’s a business imperative, according to PepsiCo’s Brad Jakeman, president, global beverage group. And failing to deliver can have severe consequences for a career.

In a conversation with AdColor founder and president Tiffany R. Warren at Campaign US’ I&C conference Tuesday, Jakeman related the tale of an unfortunate recruiter. After requesting a diverse group of candidates for a senior-level position, only one of the 10 resumes he received from this recruiter belonged to a woman. When he complained, the recruiter promised she was doing everything she could to identify talented female candidates.

But a month later, the next round of resumes included only two from women. “You’ve done everything you can, you’ve investigated and exhausted your Rolodex?” he asked the recruiter. She assured him there was nothing else she could do. So Jakeman fired her. “Unless you follow through, I’m sorry, you’re out.”

“I can’t find them,” is a common excuse for not hiring diverse talent, added Warren, who is also the chief diversity officer at Omnicom Group. “It’s like a National Geographic special. ‘Where can we find them?’”

A diversity of talent leads to a diversity of thought, a necessity for a company like PepsiCo, which markets to an audience spread out over 190 countries. “It doesn’t make any sense not to lean into diversity, when by definition, the people we serve are incredibly diverse,” Jakeman said. “It is baked into our business.”

But even at Pepsi, a company run by an Indian-American woman, making progress on the diversity front is an ongoing effort. When the majority of executives at companies nationwide are straight, white men, breaking into the boardroom is tough even without active opposition from the old guard. “We naturally like being around people like us, so there’s unconscious built-in bias at every level” of the hiring process, Jakeman said. Without diversity initiatives, “I would get resumes from—on a good day—90 percent straight, white men. Certainly 98 percent men.” Hence Jakeman’s hard line against enablers of the status quo.

He attributed much of PepsiCo’s current success to its attitude toward diversity. It’s a selling point for customers who are increasingly concerned about the beliefs and actions of the companies that make the products they buy. “It’s a whole movement of ‘I want to know not just what the company makes, but who makes the company,’” he said. It’s an easy sell when the values of the company align with those of the consumer.

A diverse staff also creates better products. Jakeman touted PepsiCo’s focus on innovation and its highly-regarded in-house content creation studio. “We attract a very high level of creative talent,” he said. “For those people to come to a manufacturer of soda, orange juice, oatmeal and chips is something that would only happen if they felt welcome there, if they saw themselves reflected in their colleagues, if their leaders are supportive of them. That just doesn’t happen by chance.”

Brad Jakeman is full of hot air. He talks a big diversity game but when you look at who's actually creating the ads, it's all white all the time.

A group of black business owners, agency owners and vendors have all reached out to him (if you dig deeply enough on Twitter and online you'll find it, down to the web page they set up), they've also made multiple requests to actually talk to the guy, and all that has happened is:

He doesn't DO anything, or hire anyone black or brown, but simply keeps talking in public about how "diversity is important" and "agencies must be more diverse."

As far as anyone knows, the only people he HAS hired for PepsiCo ad work are white LGBT and white women teams on scattershot jobs.