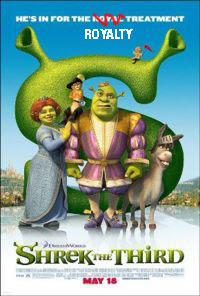 • Shrek recently came under fire for being a spokesogre for an anti-obesity campaign targeting children. Now comes news that McDonald’s has experienced record-breaking sales with a Shrek-backed Happy Meals promotion. Talk about having your McCake and eating it too.

• In the Borat film, Sacha Baron Cohen’s character was seen chasing a businessman down Manhattan’s Fifth Avenue, trying to hug the irate New Yorker. Now the businessman is chasing down Borat with a lawsuit charging violations of his civil rights led to “public ridicule, degradation and humiliation.” He’s probably angling for a part in the sequel.

• R&B star Akon recently stirred controversy by performing a racy onstage scene with an underage girl during a concert. Now the artist is in trouble for hurling a 15-year-old kid off the stage. The kid allegedly tossed something near Akon, prompting the artist to have the crowd point him out. Akon then called the kid onto the stage, picked him up and threw him back into the audience. At least one concertgoer reported receiving a concussion when the kid landed on her. Akon can probably expect a call of support from R. Kelly.
Posted by HighJive at 11:46 AM