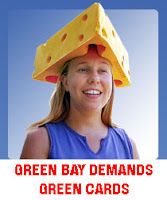 The business of doing business in Green Bay is changing this weekend because of a new ordinance that would let the city yank the operating licenses of employers who knowingly hire undocumented workers.

Proving that immigration reform is not simply a matter of congressional gridlock and talk-radio shouting, Wisconsin’s unofficial football capital added its name this week to the growing number of local communities trying to address the issue that has Congress tied in political knots.

“Look, had Congress done their job we wouldn’t have this [ordinance] in Green Bay,” Mayor Jim Schmitt said Friday. “I think at this time it’s the right thing to do, given what’s not happening at the federal level.”

The new law, set to take effect Saturday, comes amid similar local efforts around the country, including Waukegan, Ill., where the City Council on Monday authorized giving the chief of police permission to apply to Washington for authority to enforce federal immigration laws.

Many of these efforts have spawned lawsuits or questions about enforceability. A common effect of nearly all of these laws is friction with rapidly growing Hispanic communities, such as the one in Green Bay.

Luis Bello, the CEO of La Uni-k Radio, a Spanish-language radio station in northeast Wisconsin, said most people in the Hispanic community “are pretty upset about it. They feel like they’re being taken advantage of, doing jobs that most Americans aren’t willing to do.”

Bello added: “And now they feel targeted and afraid.”

The local movement aimed at regulating immigration has generally been confined to smaller towns and cities. Hazleton, Pa., population 22,000, last year approved a law that prohibited hiring or renting to illegal immigrants. That law was challenged and is before a federal district court; a similar proposal in the Chicago suburb of Carpentersville has been delayed pending the outcome of the Hazleton case.

Last year, the mayor of the western Wisconsin town of Arcadia proposed an “illegal alien task force,” designed to prevent renting to undocumented immigrants. He backed down after a public outcry.

[Click on the essay title above to read the full story.]
Posted by HighJive at 12:12 PM