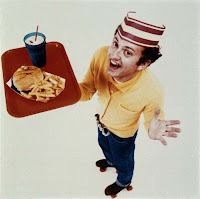 • New York City mailed over 33,000 invitations to restaurant and food suppliers for a seminar detailing the upcoming trans-fat ban. So far, about 20 people have responded for the event scheduled for Thursday. “This is the first time we are doing this. It may be people don’t want or need this kind of assistance,” said a spokeswoman for the Department of Health and Mental Hygiene. Or maybe they’re all busy eating Super-Sized Extra Value Meals at Mickey D’s.

• Wendy’s announced that it’s open to selling the company. Wonder if Wendy’s will vanish before trans fats.

• Michael Jackson agreed to a settlement with a New Jersey finance company that helped him with money deals involving the purchase of Sony’s half of the catalog of Beatles’ tunes. The company was suing Jackson, charging that he tried to swindle them out of fees. As noted in Essay 4063, Jackson recently griped that the entertainment industry is “full of sharks, charlatans and impostors. … Because there’s a lot of money involved, there’s a bunch of schmucks in there. … It’s the entertainment world, full of thieves and crooks. That’s not new. Everybody knows that.” Didn’t realize he was talking about himself.
Posted by HighJive at 9:30 AM